William Augustus Wellman was born 29 February 1896 in Brookline, Massachusetts. A notable athlete in his youth, he was seen playing professional ice hockey by Douglas Fairbanks, who was appearing in "Hawthorne of the U.S.A." at the Colonial Theatre in Boston.

With the help of his uncle, Francis Wellman, a lawyer and author of The Art of Cross-Examination, Wellman went to France, joined the Norton-Harjes Ambulance Corps and then transferred to the French Foreign Legion. After training on Bleriots and Nieuports he went into the Lafayette Flying Corps. Once he was assigned a mission to drop pamphlets on the Germans. While performing aerobatics over German lines his motor quit, but he managed to crash land and flipped upside down. He couldn't get loose and was rescued by French troops.

Wellman was nicknamed "Wild Bill" by the French for his one-man "dawn patrols" over enemy lines where he would bomb and strafe the Germans. He had two confirmed kills and was eventually shot down by AA fire. In the crash he broke his back in two places, his control stick went into the roof of his mouth and he ended up with a permanent limp and a silver plate in his head. Wellman's exploits were publicized by the press, and Fairbanks cabled him with a message: "When it's all over, you'll always have a job."

When Wellman was discharged as a sergeant from the French forces in March 1918 he left with the Croix de Guerre with two Palms, the Medaille Militaire, and the citations A L'Ordre de L'Armee and Le Pilote Americain, Marshall de Logis.

Wellman joined the U.S. Air Service and was assigned to Rockwell Field, San Diego, as a flight instructor. He would fly his SPAD up to Pickfair, Fairbanks and Mary Pickford's estate in Hollywood, and land on the polo field to attend parties. Fairbanks started Wellman in the movie business as an actor, but Wellman disliked the way he looked on the screen and asked for Fairbanks to move him into production.

He was working as a mail boy at Goldwyn Studios when General "Black Jack" Pershing visited the studio. Goldwyn had all the veterans wear their uniforms and medals to honor the general. Pershing picked Wellman out of the line-up and asked if they had ever met before. They had, at a brothel in Paris, but Wellman replied "General, I'd rather not say right here." Pershing remembered their previous encounter (Wellman had stolen and then returned Pershing's uniform pants at the brothel) and asked Wellman what he could do for him. Wellman asked that Pershing take him aside and talk to him for a while to make Wellman seem important. Pershing was glad to comply, and the next day Wellman was asked to come to Goldwyn's private office and was made an assistant director.

While working as an assistant director on The Eleventh Hour, Wellman shot footage to cover for the director who was indisposed after a drinking binge. Wellman was rewarded by being named a director in his own right. Between 1923 and 1926 Wellman directed 11 features, many of them Westerns starring Buck Jones.

Wellman was eventually selected as the director of Wings, based on his flying and wartime experiences. The story of how that film went on to win the Best Picture award is well known. Another Wellman film with a strong WWI connection is the long-forgotten Heroes for Sale. 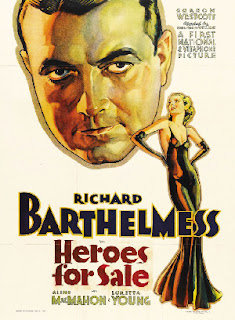 The original story idea of Heroes for Sale came from Darryl F. Zanuck. (Zanuck was the only studio head to serve on the front lines during World War I.) Wellman considered Zanuck "one of the greatest reportorial producers" for his ability to take a headline from a newspaper and "make a picture faster than anybody in the business."

Richard Barthelmess starred as Tom Holmes, the victimized protagonist of the story. Barthelmess had a well-deserved reputation for portraying "the screen's champion underdog" as Barthelmess called himself. The New York Herald Tribune called him "Hollywood's most serious-minded citizen."

While on a prisoner-seeking raiding party in no-man's-land led by Roger Winston (Gordon Westcott), the son of a banker, Holmes captures a prisoner but is wounded and left for dead by the wealthy and cowardly Winston. Found by the Germans, Holmes is treated fairly and kindly and is given morphine to control the pain. After he returns to work for Winston's father (Berton Churchill) in the bank, Holmes is revealed to be an addict and is fired. Roger Winston refuses to admit to his father that he stole Holmes's glory and did not deserve his medals.

Holmes spends time on a "narcotic farm" to be cured of his habit and relocates to Chicago where he meets Mary Dennis (Aline MacMahon), who runs a restaurant and a boarding house. He also meets Ruth (Loretta Young), who works at a laundry. Another boarder is Max (Robert Barrat) a Communist, who spends his time inventing labor-saving machinery. Tom prospers at the laundry and marries Ruth. He becomes half-owner of Max's machine and becomes rich. He tries to stop a workers strike after the laundry is acquired by new owners, and in a street battle his wife is killed.

Holmes is accused of being a Communist agitator, blamed for leading the riot he tried to stop, and is sentenced to five years in the penitentiary. While Tom's inside, Max turns capitalist and Tom discovers that he's rich himself because of his investment in Max's machines. When he's released and returns to Chicago he's hounded out of town by the "Red Squad" and hits the road. He even meets up with Roger in a hobo camp. Roger and his father stole from their depositors and the bank went bust. Roger's father committed suicide and Roger served two years. Both Tom and Roger are reduced to homeless wanderers in Depression-era America, but Tom never loses his optimism and belief in America.

Heroes for Sale reflects the contemporary confusion and turmoil of a nation in the depths of the Great Depression. Shooting started on 6 March 1933 just two days after all the banks in the United States were forced to close. And just two days before, President Franklin Roosevelt had enacted the Emergency Banking Bill that started the era of the New Deal. Wellman worked quickly and efficiently; Heroes for Sale was shot in just 23 days, coming in under schedule. It was released on 21 July 1933 and premiered at The Strand in Times Square in New York City.

Heroes for Sale suffers from a confused script, but it was one of the major "topical films" from 1933. The Baltimore Sun said in its review, "If we didn't know better, we would suspect that the American Legion, the American Civil Liberties Union, and Comrade Stalin of Moscow collaborated in writing Heroes for Sale." The mud-and-rain battle sequence has a swooping moving camera that shows how Wellman had a strong control of the war genre. Throughout the film themes common to Wellman's works are on display—sacrifice and survival. The scenes of jobless men searching for work foreshadow the work of Dorothea Lange and Walker Evans. The hobo camp sequences presage The Grapes of Wrath.

Gold Diggers of 1933 with the famous "forgotten man" number was in production at the same time as Heroes for Sale at the Warner Studio.

The Forbidden Hollywood Collection, Volume Three includes six pre-Code feature films directed by William Wellman: Other Men's Women, The Purchase Price, Frisco Jenny, Midnight Mary, Wild Boys of the Road, and Heroes for Sale. This set includes two documentaries: Wild Bill: Hollywood Maverick and The Men Who Made the Movies: William A. Wellman. Among the bonus features are three original S.S. Van Dine detective mysteries written for the screen. One of the shorts, The Trans-Atlantic Mystery has a plot twist based on an Armistice Day poppy.