World War I Burials in Paris

Paris does not have a national military cemetery, but French veterans of the war are buried throughout Paris. Some have personal memorials and graves. The Pantheon, for instance, has several interesting interments connected with the war: former Poilu and Nobel Peace Prize recipient René Cassin, Marie Curie, who developed a mobile X-ray service for the French Army, and the assassinated socialist politician Jean Jaurès.

The American Battle Monument Commission maintains a Suresnes Cemetery on Mont Valerian just across the Seine, east of Bois de Boulogne. It contains 1,500 American burials from the war, mostly of soldiers who died in Paris hospitals. There is also a Commonwealth War Graves Cemetery with about 100 British burials of men who died while being treated at hospitals in the Paris area. It is located at near the Porte de Pantin on the road to Le Bourget Airport. 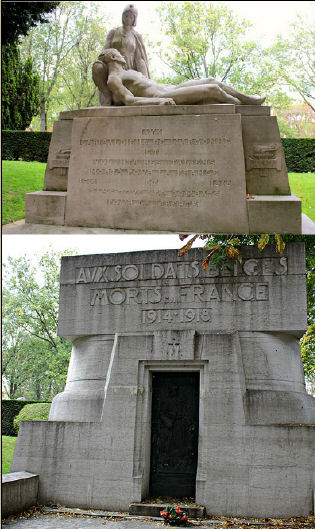 Père Lachaise Cemetery located at Boulevard de Ménilmontant, 10th Arrondissement, is the largest cemetery in the city limits and is reputed to be the world's most visited cemetery. It holds the remains of numerous memorable and notable individuals, such as Great War writers Henri Barbusse, Jules Romains, and Guillaume Apollinaire, as well as the controversial minister of the period, Joseph Caillaux. It is also the site of multiple Great War memorials, two of which are shown above, monuments to the Italian (upper) and Belgian (lower) Fallen of the War.