In a supreme irony of history only one of the French principals of "Affaire Dreyfus"  actually fought in the defense of his country during the Great War.

Colonel Sandherr, who with his subordinate Major Henry  manufactured the disinformation about Dreyfus,  died of natural causes (a stroke) in 1897.

Major Henry, himself,  committed suicide with his razor in his prison cell, on 31 August 1898.

Major Esterhazy, actual perpetrator of the deed for which Dreyfus was accused, died of natural causes near London in 1923. He did not participate in the war.

Colonel Picquart, who discovered Dreyfus's innocence, became minister of war in Clemenceau's cabinet, in 1908. It is during his tenure that the number of 75 batteries in the French Army was voted by the Chamber of Deputies to be doubled! The Army entered the war in 1914 with a thousand 75mm batteries of four guns each. Picquart died from a fall, while practicing horsemanship, on 19 January 1914.

However, one principal of the "Affaire Dreyfus" did serve with distinction in the Great War. Although he was already beyond normal retirement age, Alfred Dreyfus returned to active duty as a lieutenant-colonel of artillery in 1914 and served for the entire war, including frontline duty in 1917. Alfred Dreyfus was later raised to the rank of officer of the Legion of Honor just before the Armistice, in November 1918. 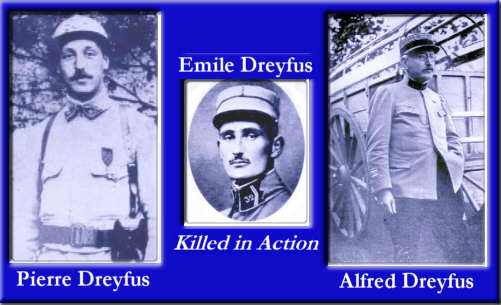 His long-suffering family shared in the sacrifice and call to duty. Alfred Dreyfus's son, Pierre Dreyfus, served as a lieutenant and later a captain in 75mm batteries on the Western Front. Pierre Dreyfus participated in the Marne, Verdun, the Somme and in the final drives during the summer and fall of 1918. He survived to receive the Croix de Guerre with palms and other decorations. Alfred Dreyfus's two nephews, Emile Dreyfus and  Ado Reinach also fought as artillery officers in 75mm regiments, but both lost their lives on the field of honor, thus striking the family with further devastation. Alfred Dreyfus, himself, died quietly in bed on 11 July 1935.