There was an unexpected windfall for the Allies when America joined the war—help with the enormous load of casualties in the 1917 campaign. The first American military installation in France during World War I was Base Hospital No.4 (Cleveland), which arrived on 25 May 1917 to cheering French crowds on, 19 days ahead of General Pershing and the nucleus of his American Expeditionary Force staff. Also known as the Lakeside Unit, the Cleveland unit served at Rouen throughout the war. American physicians, nurses, and enlisted men such as these would be the earliest AEF participants to face the possibility of death and destruction—actually months before the first American soldiers would see combat. 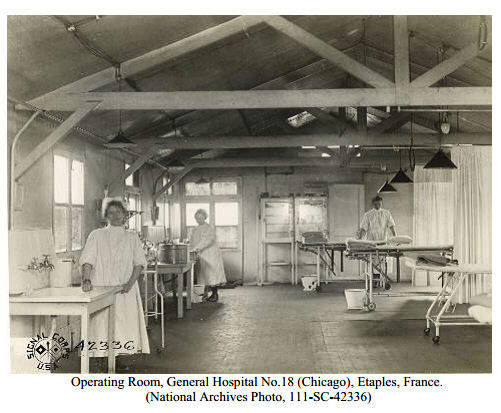 Base Hospital No.4 treated 82,179; No. 10 treated 47,811; and No. 21 treated about 60,000. These numbers do not include the numbers of patients the Americans treated at the Casualty Clearing Stations or while working with British units. Overall, a daily average of approximately 800 officers, 600 nurses, and 1,100 soldiers was serving with the British. 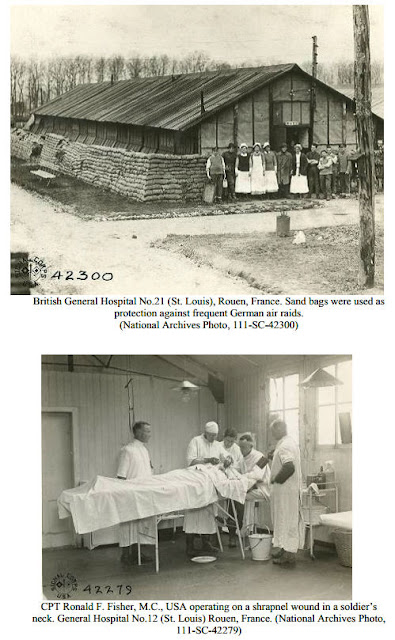 One of the hazards they faced was German night bomber raids, which attacked hospitals despite the Red Cross markings. Tragedy struck on 4 September 1917, when the Germans bombed Base Hospital No. 5 at Camiers, killing Lieutenant William T. Fitzsimmons and Privates Oscar C. Tugo, Rudolph Rubino, Jr., and Leslie G. Woods, who became the first A. E. F. casualties by enemy action.