After the resounding failure of the Nivelle Offensive–named for its mastermind, the French commander Robert Nivelle–the previous May, which was followed by widespread mutinies within the French army, General Haig insisted that the British should press ahead with another major offensive in Flanders that summer.

The aggressive and meticulously planned offensive, ostensibly aimed at destroying German submarine bases located on the north coast of Belgium, was in fact driven by Haig’s (mistaken) belief that the German army was on the verge of collapse, and would be broken completely by a major Allied victory.  The main operation to be launched out of the Ypres Salient was to be preceded by another operation to secure the southern flank of the main push.  Since 1914 German forces had occupied a bulge in the British line that had long been a major nuisance and would be an ideal location for a flanking attack on any British forces moving to the east. The major German defensive feature in the sector is the Messines (or Messines-Wytschaete) Ridge shown on the map below. General Herbert Plumer's 2nd Army was given the job of eliminating the position. 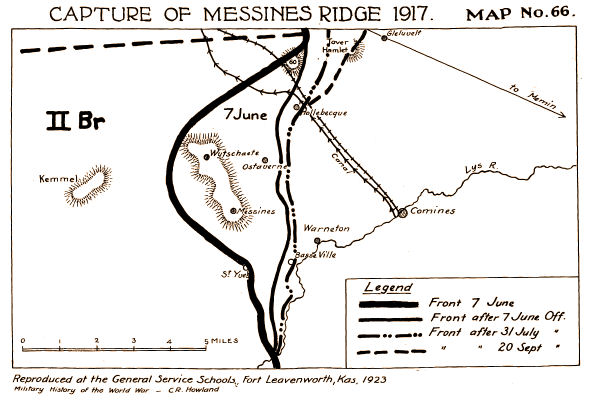 On the morning of 7 June 1917, at 04:10 local time (Zero Hour), the British exploded 19 of the 24 deep mines, almost simultaneously, between Hill 60 and The Birdcage (southwest of Warneton). The gigantic explosions destroyed the enemy positions and created huge craters in the landscape. One bunker was actually turned upside down. The explosions created the loudest man-made noise in history—until, that is, the detonation of the atomic bombs at Hiroshima and Nagasaki. A student is reported to have heard it in Dublin. The explosion was heard by the British prime minister David Lloyd George, who was working late in his Downing Street study.

The surprise was total and the impact and the chaos among the Germans were enormous. In the fighting and the gigantic artillery bombardment that followed the mine explosions, British, Irish, Australian, and New Zealand units succeeded in taking the Wytschaete-Messines Ridge. Their total losses came to 15,913 dead, 23,953 wounded, and 10,595 missing. Their most serious casualties were suffered when the various attacking units converged on Messines Ridge along a much reduced front line and German artillery could concentrate its fire on them. Despite the losses, it was the greatest British military success of the war up to that time. The Germans sustained an equivalent number of casualties, including an estimated 10,000 killed in the initial mine explosions.

Seven kilometers of territory had been gained. In the wake of the disasters of the previous year, 1916, the British were euphoric. Both civilians and the military needed a boost. But there was a sequel to come, and soon. The second phase of the Flanders Campaign was the Battle of Passchendaele, which did not begin until 31 July, nearly eight weeks later. Some say that the commander-in-chief, Douglas Haig, waited too long, thereby giving the Germans time to repair and improve their defenses.