Knights of Columbus Service in the Great War, Part I 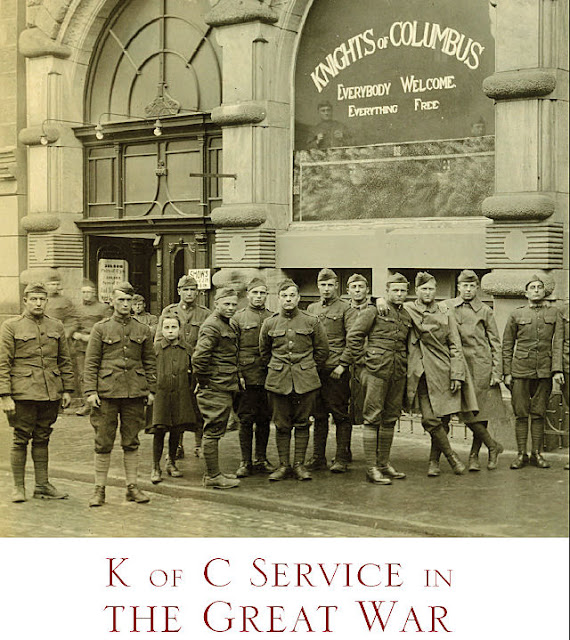 
A century ago, as World War I raged in Europe, the United States declared war on Germany on 6 April 1917. When Americans joined the war effort and soldiers sailed overseas, the whole country was soon singing “Over There,” the hit song by George M. Cohan.

Among the U.S. servicemen shipping over to Europe were some 100,000 members of the Knights of Columbus, including hundreds of clergy and war relief workers. Many more Knights would assist in war relief in the states, keeping up morale at military camps and raising funds. Knights from Canada already had been fighting in the trenches for more than two years. World War I officially began on 28 July 1914, and Canada entered the war the following week, together with the United Kingdom.

To mark the centenary of the U.S. involvement in the war, a new major exhibit is now on display at the Knights of Columbus Museum in New Haven, CT, and will be open through 30 December 2018. The title of the exhibit, “World War I: Beyond the Front Lines,” speaks to soldiers’ lives during the long months of war, including how the Knights provided them major support.

The Order’s work had such an impact that Gen. John Joseph Pershing, commander of the American Expeditionary Forces (AEF), stated that “of all the organizations that took part in the winning of the war, with the exception of the military itself, there was none so efficiently and ably administered as the Knights of Columbus.”

"EVERYBODY WELCOME, EVERYTHING FREE"

On 14 April eight days after the United States entered the war, the K of C board of directors passed a resolution, which was sent to President Woodrow Wilson. It assured the president that “the crisis confronting the nation hereby reaffirms the patriotic devotion of 400,000 members of this Order in this country to the Republic and its laws and pledges their unconditional support to the President and Congress.”

Soldiers needed a respite from the war; they needed Mass and the sacraments. The Knights of Columbus came to the rescue, providing a major service with recreation centers, which became known as huts. This initiative was inspired by 15 such centers that the Order had established the previous year for National Guardsmen serving along the Mexican border. The Knights’ Committee on War Activities coordinated fundraisers and war relief efforts, and the Order soon financed huts both in the United States and around Europe. When the first goal of $1 million was raised in record time from the stateside councils, the goal was upped to $3 million. Catholics and non-Catholics alike donated, and the goal was raised again to $12 million. The final amount exceeded $14 million—at a time when bread was 7 cents a pound.

Similar efforts were already underway in Canada for war relief efforts. Canadian Knights at first helped by providing chaplains with portable altars and giving soldiers rosaries, medals, and prayer books, as well as entertainment. Because recreation huts in England were run by non-Catholics, Catholic chaplains from Canada eventually appealed for K of C help to establish huts for the Canadian camps in England and France.

In May 1917, plans to erect Catholic huts for Canadian soldiers were set in motion thanks to the efforts of Knights such as Major Rev. John J. O’Gorman, an Ottawa-based priest who spearheaded the Catholic Army Huts program in Canada. With the support of K of C state councils and the Canadian hierarchy, a series of fund drives were launched that raised more than $1.2 million for some 30 Canadian huts in France and 20 in England, all of which were run by Catholic chaplains.

Meanwhile, dozens of huts were built on or near U.S. military bases in the United States and Europe, offering soldiers an escape from the war. The spaces were versatile, and even the largest were designed to make the soldiers feel like they were at home, with tall windows and bright colors.

The K of C hut slogan was “Everybody Welcome, Everything Free.” No soldier or sailor had to pay a cent for anything the Knights gave them, nor would any free will offering on their part be accepted by the secretaries who ran the huts. They gave everything free to whoever walked in, with no questions about religion, race, or rank. The uniform was all that mattered.

In the huts, soldiers had the opportunity to attend Mass, go to confession, hear a music recital, see vaudeville entertainment, or watch a movie. They could attend a dance, sit ringside at popular boxing competitions, write letters home (the Knights provided 1,800 tons of stationary), or read a book from the library.

The exhibit at the K of C Museum has a wonderful example of a typical hut, down to the player piano, around which soldiers would sing wartime favorites like “Keep the Home Fires Burning.”

They would also join in the chorus of the Knights’ official hut song, “Everybody Welcome, Everything Free!”—“Ev’rybody welcome, ev’rything free. That is the slogan of the K of C. For all the boys here, and ‘Over There,’ The K of C is doing its share.” By the summer of 1918, when the National Catholic War Council was created to coordinate Catholic works related to the U.S. war effort, the Knights of Columbus continued in its role as the Catholic agency providing recreational activities.

This article appeared in the May 2017 issue of Columbia magazine and is reprinted with permission of the Knights of Columbus, New Haven, Conn. Thanks to Richard VandenBrul for making this possible.