This month marks the 99th anniversary of the U.S. Marine assault on Belleau Wood, so I thought I could share a few things that will help you understand what the media has to say about it. These comments and the graphic I've constructed below are based my own observations and questions and observations I've had from tour members on over a dozen visits to Belleau Wood.

1.  It is bigger than most people expect; the map below covers over a square mile.  You can't see it all from one position.

2.  The attack direction (red arrows) is not north to south, but from the southwest to northeast. This is because the Marines were attacking the side of a salient created by the recent German push to Château-Thierry and the Marne river, which are southeast of Belleau Wood.

3. The American Cemetery is not shown on the graphic. It is just to the right of  of the last letter of the "Hunting Lodge" caption, but the wood is on a plateau and there is an abrupt drop-off down to the cemetery.

4.  The bottom illustration, C, by noted French artist George Scott, accurately depicts the wood at the end of the fighting. Following the battle of Belleau Wood, Scott traveled to the battlefield and interviewed Marine veterans of the struggle 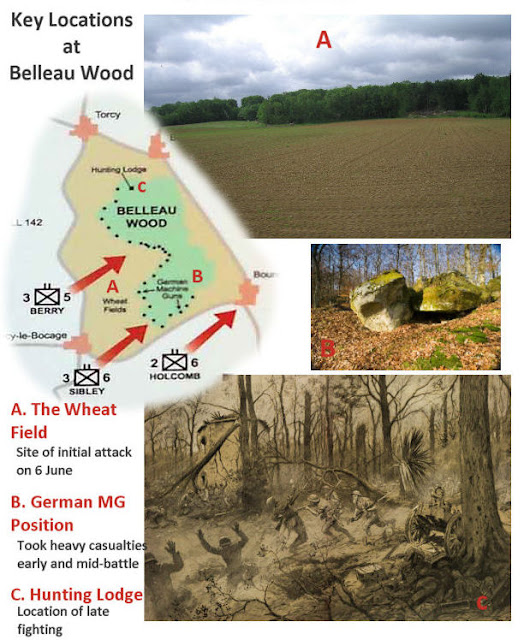