Few people remember Joyce Kilmer, the American writer killed in action in July 1918. In a very informal survey I once asked some friends, all reasonably well educated and "of a certain age," if they had heard of him. None had. All, however, were familiar with the lines "I think that I shall never see/A poem lovely as a tree," from Kilmer's poem "Trees."

The recollection of these lines seems all that remains of the American journalist, editor, and poet who, born in New Jersey in 1886, enlisted in 1917 and as a sergeant in the 42nd Rainbow Division met sudden death at age 32 at the Second Battle of the Marne. (Probably even less remembered is that his father, Dr. Frederick Barnett Kilmer (1851-1934), a chemist employed by the Johnson and Johnson Company, was the inventor of baby powder.)

Before America entered the Great War, Kilmer was an established writer and poet, with some 42 published poems to his credit. Perhaps "Trees" was his best-known work, and it was certainly popular among ladies who liked to sing it at gatherings in their parlors. Yet to judge Kilmer by this rather lightweight and sentimental lyrical poem is to underrate a poet who also composed longer and stronger works such as "The White Ships and the Red" and "Rouge Bouquet."

The former is a lengthy and haunting reflection on what just a week earlier in May, 1915, had shocked the nation: the sinking of the RMS Lusitania. For Kilmer, as for much of the nation, this was an act of shocking barbarity. He poetically imagines how countless ships that over the centuries had sunk to the bottom-Spanish galleons, Roman triremes, and even "the grim Titanic"-now look up from their resting places startled and shocked:

The ghostly vessels trembled
From ruined stern to prow;
What was this thing of terror
That broke their vigil now?
Down through the startled ocean
A mighty vessel came,
Not white, as all dead ships must be,
But red, like living flame!

Soon the Lusitania gives her answer, reinforcing the color imagery of the white ships that had met their ends in expected ways and the red ship now joining them, stained by an unexpected, bloody and shameful act:

But never crashing iceberg
Nor honest shot of foe,
Nor hidden reef has sent me
The way that I must go.
My wound that stains the waters,
My blood that is like flame,
Bear witness to a loathly deed,
A deed without a name.

I went not forth to battle,
I carried friendly men,
The children played about my decks,
The women sang – and then –
And then – the sun blushed scarlet
And Heaven hid its face,
The world that God created
Became a shameful place!

What was not known of course in May1915 was that the Lusitania also carried less innocent cargo. Thus the poem effectively conveys the sense of shock and injustice the sinking caused, all intensified by the aura of grief and tragedy that emanates from the ghost ships.

Also tragic for Kilmer in 1915 was the death of a fellow poet, Rupert Brooke, at the time one of Britain's most admired war poets. Brilliant and handsome, Brooke's death from blood poisoning and burial on the Greek island of Skyros during the Dardanelles campaign sent shock waves throughout the artistic (and probably female) population. Some of this adulation finds its way into Kilmer's timely and somewhat romantic poem "In Memory of Rupert Brooke":

In alien earth, across a troubled sea,
His body lies that was so fair and young.
His mouth is stopped, with half his songs unsung;
His arm is still, that struck to make men free.
But let no cloud of lamentation be
Where, on a warrior's grave, a lyre is hung.
We keep the echoes of his golden tongue,
We keep the vision of his chivalry.

By 1917 Kilmer himself was on a troopship as part of the Irish-American "Fighting 69th" of the 42nd Division. The hardships his regiment was to endure on the march through the Vosges Mountains and into several months of combat are well recorded in Stephen Harris's notable book Duffy's War, but it is on one event at the front that Kilmer's poetic skills most sharply focused.

On 27 February 27 1918 his regiment took up duty in the trenches in the Rouge Boquet Chausailles sector. On 7 March  at 3:20 p.m. the enemy began an artillery barrage of the American trenches in what was supposed to be a "quiet sector." A shell landed on the roof of a dugout in which one officer and 21 men were assembled, and although two men were rescued and five bodies recovered, most were buried alive despite desperate rescue efforts.

It didn't take long for Kilmer to immortalize these men in what is his most noted war poem, "Rouge Bouqet." In the poem he carefully weaves strands of realism, commemoration, Catholic faith, Celtic allusions, and perhaps most notably, the theme and significance of the last notes of "Taps:"

In a wood they call the Rouge Bouquet
There is a new-made grave to-day,
Built by never a spade nor pick
Yet covered with earth ten metres thick.
There lie many fighting men,
Dead in their youthful prime,
Never to laugh nor love again
Nor taste the Summertime.
For Death came flying through the air
And stopped his flight at the dugout stair,
Touched his prey and left them there,
Clay to clay.
He hid their bodies stealthily
In the soil of the land they fought to free
And fled away.
Now over the grave abrupt and clear
Three volleys ring;
And perhaps their brave young spirits hear
The bugle sing:
"Go to sleep!
Go to sleep!
Slumber well where the shell screamed and fell.
Let your rifles rest on the muddy floor,
You will not need them any more.
Danger's past; Now at last, Go to sleep!"

There is on earth no worthier grave
To hold the bodies of the brave
Than this place of pain and pride
Where they nobly fought and nobly died.
Never fear but in the skies
Saints and angels stand
Smiling with their holy eyes
On this new-come band.
St. Michael's sword darts through the air
And touches the aureole on his hair
As he sees them stand saluting there,
His stalwart sons;
And Patrick, Brigid, Columkill
Rejoice that in veins of warriors still
The Gael's blood runs.
And up to Heaven's doorway floats,
From the wood called Rouge Bouquet,
A delicate cloud of buglenotes
That softly say:
"Farewell!
Farewell!
Comrades true, born anew, peace to you!
Your souls shall be where the heroes are
And your memory shine like the morning-star.
Brave and dear,
Shield us here.
Farewell!"

The poem was almost instantly famous among the men of Kilmer's regiment. According to Yanks, a book of A.E.F. verse printed in France by Stars and Stripes in 1918 (and sold for 2FRF or 50 cents) the poem was dedicated to the 19 Doughboys who died in that dugout in the forest on 7 March 7. At the service conducted at the site by the popular Father Duffy the men placed a tablet, and Kilmer's poem was read aloud by Duffy while "Taps" was played before the last lines of each verse by a bugler on the spot and echoed by another from a copse in the woods. There were few dry eyes.


The poet/soldier had only a few months left to live. After seeing some savage fighting, he was killed by a sniper's bullet while in action on 29 July 1918. He died by the Ourcq River, a stream in Picardy, and his comrades buried him by the side of the stream. Today, Kilmer rests nearby at the Oise-Aisne American Cemetery. A stop by his grave is by far the most frequent request from visitors. The staff there always brings along a copy of "Rouge Bouquet" and encourages a reading of the poem at the grave site. It's always a moving event. 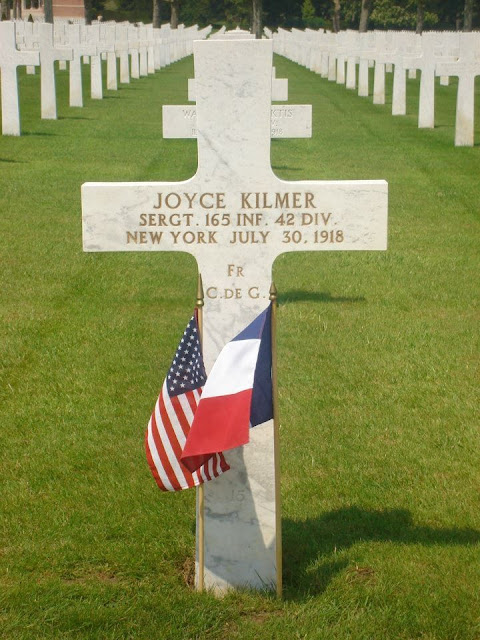 Back home, he left behind a wife and three children. Many in his regiment were greatly affected by his death not only because he was "their poet" but also because he was an extremely well-liked and respected comrade.