What Happened at Côte de Châtillon?


Highly fortified Côte de Châtillon was a formidable obstacle to the advance of Pershing's First Army in the middle of October 1918.  III Corps commander Lt. General Robert Bullard described the defenses in this sector:

The way out is forward, through the Kriemhilde Stellung, eastern section of the Hindenburg Line.... Not a line, a net, four kilometers deep. Wire, interlaced, knee-high, in grass. Wire, tangled devilishly in forests.... Pill boxes, in succession, one covering another. No 'fox hole' cover for gunners here, but concrete, masonry. Bits of trenches. More wire. A few light guns.... Defense in depth. Eventually, the main trenches. Many of them, in baffling irregularity, so that the attacker cannot know when he has mopped up.... Farther back, again defense in depth, a wide band of artillery emplacements

The centerpiece of this system, the Côte de Châtillon, was eventually captured by the 84th Brigade (mostly Alabama and Iowa troops) of the 42nd Rainbow Division. The brigade's commander was none other than Brigadier General Douglas MacArthur and his personal legend is deeply intertwined with the details and historical record of the fighting.  A contemporary news account summarized both the operation and MacArthur's decoration for his leadership. 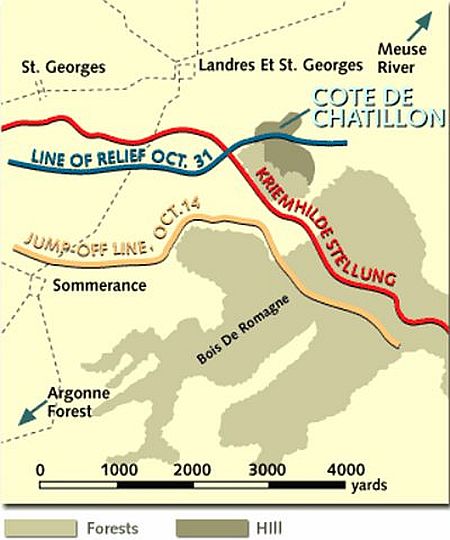 Brig. Gen. Douglas MacArthur, former Washington press censor, has been cited again. He now has the right to wear, in addition to the French war cross given him while serving as chief of staff for the Rainbow division, the distinguished service cross of the United States army, decorated with a bronze oak leaf as an indication that he won the coveted decoration a second time. Incidentally, according to a personal letter reaching here today. "Gen. MacArthur has been wounded again, although he since fully recovered and is back leading the 84th brigade of the 42nd division into Germany toward the Rhine."


MacArthur received his latest citation for gallantry in leading his brigade at the taking of the Cote de Chatillon and hills 288 and 232. The first account of this operation of the world-famed Rainbow division as received here, says:

The Côte de Châtillon is 820 feet high and it dominated that part of the Kriemhilde Stellung which ran in front of [the villages of St. Georges and]  Landres-St-Georges. The Americans on Wednesday, Oct. 15. attempted its capture. Traversing Its slopes yard by yard, they found that the Germans had constructed a machine gun fortress on the heights and every minute of 40 hours spent there the troops were exposed to a merciless rain of lead from all sides. A 77 gun, ensconced on the summit of the height, also poured down its deadly messages. Slowly the Americans, cradling on their stomachs, faced a massed fire of machine guns and rifles which was accompanied by shrapnel and hand grenades.

It was deadly work, trees all wired together made an almost Impossible barrier and volunteers had to face the fire to cut lanes through this belt of wire. It was decided, however, to bring up Stokes mortars. Through the mud and rain the Americans dragged them up to their positions and turned them on the Germans, Several of the enemy surrendered but a majority fought on. Hour after hour went by and brought no cessation of the merciless struggle. Yard after yard the Americans gained, stopping not for the darkness of the night. At last the greater part of the slopes were gained. The wire had been penetrated. Out came the bayonet, and with a wild hurrah the Americans fell upon the enemy. But these Germans were brave men. Standing beside their guns they fought to the last, dying where they stood. Finally the hill was ours, the 77 gun a prize, and the German garrison, except for a few prisoners, wiped out completely. It was a glorious victory.
_______________


Douglas MacArthur's citation for the action gives him full credit for achieving the objective:

Brigade Commander Gen. MacArthur personally led his men and by the skillful maneuvering of his brigade made possible the capture of hills 288, 222 and the Côte de Châtillon Oct. 14, 15 and 16, 1918. He displayed Indomitable resolution and great courage In rallying- broken lines and In reforming attacks, thereby making victory possible. On a field where courage was the rule, his courage was the dominant feature."

Many histories of the Meuse-Argonne Offensive include an anecdote that runs something like this.  Corps commander Charles Summerall in a meeting with MacArthur says, "Give me Chatillon or a list of 5,000 casualties," to which MacArthur was said to quickly respond, "All right general; we will take if or my name will head the list."  MacArthur's dedication to the mission shows up in other accounts. He was gassed in the front line just before the battle, writes one historian; he found the decisive weak spot in the German line in a personal reconnaissance, wrote another.  It's not an exaggeration to say that Côte de Châtillon gifted MacArthur with the reputation as the greatest combat commander of the AEF.

That is where things stood until 2008, when Professor Robert Farrell, author and editor of many admirable works on the First World War, decided to puncture MacArthur's  Côte de Châtillon legend in a brief work, The Question of MacArthur's Reputation: Côte de Châtillon.   Farrelll examined original documents and discovered that there is not much authentication of the details of MacArthur's actions during the battle, except that he spent much of the fighting time at the brigade command post, three miles to rear. He also reminds that his subject had a 50-year-long reputation for exaggeration and hyperbole.  Nonetheless,  Professor Farrell's singular position hasn't seemed to lead to a major shift in opinion about MacArthur's World War I service. More recent histories covering the Meuse-Argonne, by Mitchell Yockelson and Stephen Harris, describe MacArthur's actions at Côte de Châtillon in the conventional way.

In any case, what should be most remembered about the action was its costliness.  The entire Rainbow Division suffered 3,000 casualties in five days of fighting in this sector. Well over half of these were on the slopes of  Côte de Châtillon.