Centennial Commemoration of the Signing of the Treaty of Versailles

From Our Correspondent Virginia Dilkes

“The evening began with a grand entrance across a red carpet bordered by flags of nations involved in the bloody conflict including those from France and the United States.” We were welcomed by the honor guard in the Cour d’Honneur. The welcome was organized by l’Office National des Anciens Combattants et Victimes de Guerre.  Once inside the palace we were offered a glass of champagne and then led to the Salon d’Hercule where a string quartet dressed in 17th-century attire played while Louis XIV and his wife danced the minuet. We strolled through the Royal Apartments and other salons where we were entertained by a brass quartet or a harpist in period dress.

We entered the Hall of Mirrors and could only reflect on what took place in this Hall 100 years ago. The Treaty of Versailles was over seven months in the making. During the negotiations there were bitter arguments not only among the negotiators but also within the Allied constituency.  The acrimonious deliberations took their toll on the health of the participants. So much has been written about the intentions and misunderstandings of the Armistice of 11 November 1918 and what ultimately evolved as the Treaty of Versailles. So much has been written about the role the Treaty of Versailles has had or may have had on world events that transpired within the 20 years after the treaty. These thoughts would go through the minds of the invited guests as we strolled through the Hall of Mirrors to the Salle du Sacre. 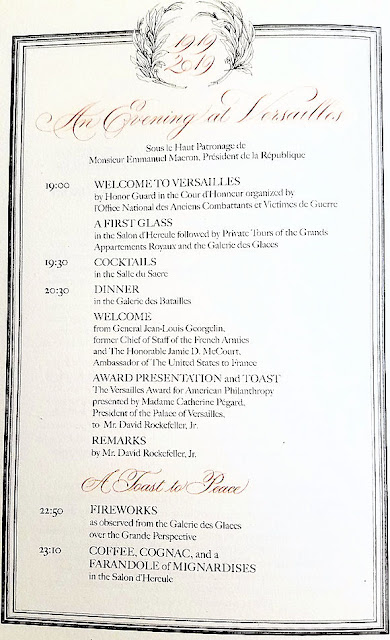 We were served cocktails in the Salle du Sacre. We were then shown into the Hall of Battles where dinner was served. The elegance of the banquet was everywhere—from the table settings to the Dîner menu, to the listed program, to the care in which the executive chef designed the evening service. I was impressed with how Executive Chef Alex Hitz (from Atlanta, Georgia) with extensive travels in France researched the traditions and foods of the WWI era, which he served to us this evening. A note in the program described his family’s active involvement in WWI with both of his grandfathers serving in the Great War.

We were welcomed by General Jean-Louis Georgelin, former Chief of Staff of the French Armies, and the Honorable Jamie D. McCourt, Ambassador of the United States to France, and by Colonel Jennifer Pritzker, the presenting sponsor of the commemoration. The highlight of the evening was the presentation of the Versailles Award for American Philanthropy by Madame Catherine Pégard, President of the Palace of Versailles, to David Rockefeller, Jr., who represented the Rockefeller family. The award was to acknowledge the philanthropy of John D. Rockefeller, Jr., who worked to rebuild France after WWI. M. Pégard wrote he “rescued the Palace of Versailles from dereliction after the First World War, and understood not only the universal significance of this great palace, but also its importance for his own country.” A plaque recognizing the work of John D. Rockefeller from 1924–1936 was hung in the Palace on 30 June 1936, the 17th anniversary of the signing of the Treaty of Versailles.

Before concluding, some well-organized events held on 28 June, preceding the banquet,  should be mentioned.  A day-long seminar on the Versailles Treaty and American Philanthropy was held on the palace grounds, and a commemorative event took place afterward at the now completed Pershing-Lafayette Monument on the Avenue des Etats Unis at the entrance to the village of Versailles. More on these events will be posted in future editions of Roads to the Great War.

The 28th of June 2019 ended with firework, just as it did one hundred years ago. We were led back to the Hall of Mirrors where we watched the fireworks over the Grande Perspective.  Cognac was served in the Salon d’Hercule as a final tribute to the evening. Congratulations to the Versailles 1919–2019 Steering Committee led by Commissioner Dr. Monique Seefried and Ambassador (ret.) Louise V. Oliver for a meaningful commemoration to the treaty that ended the war that changed the world. 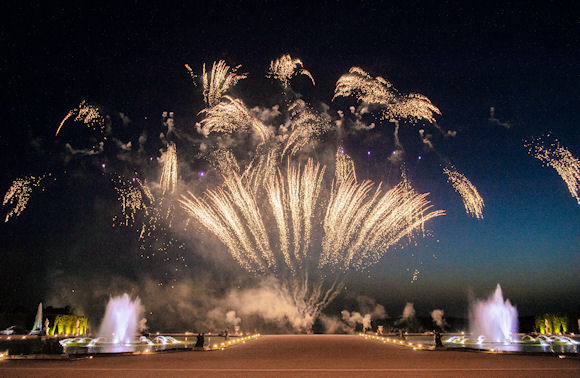 The “Evening at Versailles” not only commemorated the signing of the treaty but was also a fundraiser for the U.S. WWI Memorial in Washington, DC, and the restoration of the Queen’s Grove in the Palace of Versailles gardens. The National World War I Memorial, which tells the story of “A Soldier’s Journey,” will be located next to the White House on Pennsylvania Avenue.  It is the story of the over four million American men and women who participated in the war effort; the two million who went overseas; and the 116,516 who gave their lives to keep the world free from tyranny. Its construction is being supported by the generosity of people from all over the world.

The Queen’s Grove is an ornamental garden designed for Queen Marie-Antoinette, wife of Louis XVI. When it was created in 1776, this flower garden contained many North American varieties newly introduced into France, such as the Virginia tulip tree. The grove will be replenished with diverse botanical species including tulip trees from Virginia.

To help with the construction of the National World War I Memorial in Washington, DC, one can help raise the remaining needed funds. A check made out to the “U.S. Foundation for the Commemoration of the World Wars” can be mailed to:


To help with the Restoration of the Queen’s Grove in the Palace of Versailles, one can adopt a Virginia tulip tree.  A check made out to “L’agent comptable de l’EPV” can be mailed to: