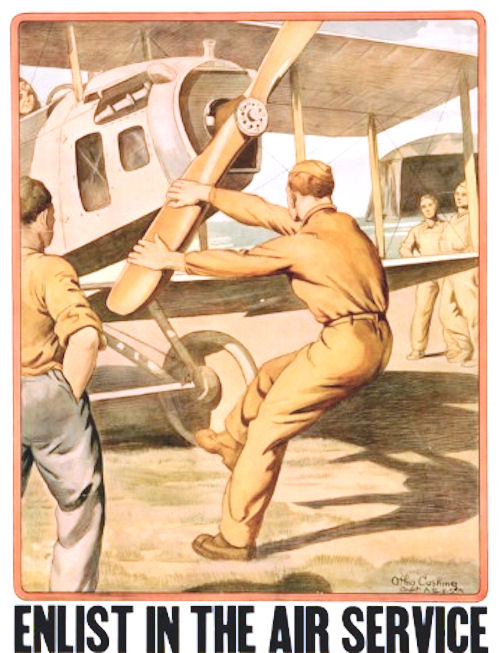 By Major Douglas A. Galipeau, USAF

In the [100] years following World War I, America's pilot training program has remained, at a very fundamental level, unchanged. Intensive ground training followed by incremental flying training using both dual-control and solo flight methods remain the core of today's training programs much as they were in 1917. Although it is tempting to declare the Army Air Service's pilot training program in World War I another triumph for American ingenuity and know-how, nothing could be further from the truth. While the story of the making of America's first eagles is truly phenomenal, it is anything but uniquely American.

In April 1917, America faced the task of fighting a war that she was by no means prepared to fight. Not only was America faced with the daunting challenges of mobilizing an army ill-prepared to fight a major conflict, she also had to create an air force from virtual non-existence. There was no industrial base from which to build the aircraft for an air force and no training program to develop the aviators to the fly the aircraft once they were built. Lt Col Hiram Bingham, one of the early developers of the American aviation training program summarized the state of affairs in April, 1917:

We lacked men of experience; we lacked able executive officers with a sympathetic knowledge of aviation; we lacked airplanes fit to fly against the Huns; and we lacked the facilities for building them....In other words, America expected to win the war in the air and was utterly unprepared to do so.

While the Allies expected American industrial might to contribute significantly to aircraft production, the more immediate problem was the supply of trained aviators. With virtually no training program in existence and relatively little time to develop one, the decision was made early on to implement training programs which mirrored the tested and well-proven programs of the Allies. Canada, as our closest ally, provided the solution for our stateside training program. The Canadian system was based on the RFC training program and was adopted by the U.S. in total. This system used dual-control training intermingled with solo flights and provided the most rapid means of accomplishing preliminary and advanced training prior to sending American pilots to France for combat duties.

Training at the preliminary schools in U.S. began almost immediately, but it soon became apparent that the advanced schools would not be able to produce pilots frontline duty quickly enough. In an effort to speed up the process of producing combat-ready pilots, the decision was made to open an American school (Issoudun) in France. Establishing the school at Issoudun not only sped-up the process of producing pilots, it also improved the quality of training for those pilots. Instead of waiting for advanced training in the U.S., American pilots would receive training from combat veterans, in aircraft similar to those being flown at the front.

Within months of the decision to establish an American school at Issoudun, often referred to as the largest mud hole in France, the 3rd AIC was fully functional and training American pilots. Issoudun was made up of many individual airfields (as many as 15 by the end of the war) with different phases of instruction occurring at each field. Initially the preponderance of instructors and aircraft were French and naturally the training method used was the French Blériot system. This system was based on teaching self-reliance and followed a very structured program. With the exception of the training at Field 2, all flight training was accomplished by the students without an instructor. Even though the American pilots had already received preliminary training in the U.S., this type of training added greatly to the self-confidence of the individual pilots and produced the likes of Eddie Rickenbacker and Frank Luke, Jr.

While the American training system was still not producing aviators in the numbers promised upon her entry into World War I, by 11 November 1918 the American training program was producing combat-ready aviators in significant numbers. By all estimates, if the war had continued, America would have probably exceeded all expectations in producing aircraft, aircraft mortars, and, most important, pilots. At the signing of the Armistice, the Army Air Service had grown from an air force of only 65 rated officers to one with 80 aces (5 or more "kills") in a time span of only 17 months. The combat success of America's fledgling eagles is a direct result of the of the training programs adopted in the United States and at the pursuit school at Issoudun.