In this photo, taken on a September 1918 day in Boston, a proud military officer stands tall on top of a pile of something that would save thousands of lives on European battle fronts—peach pits. Yes, peach pits. 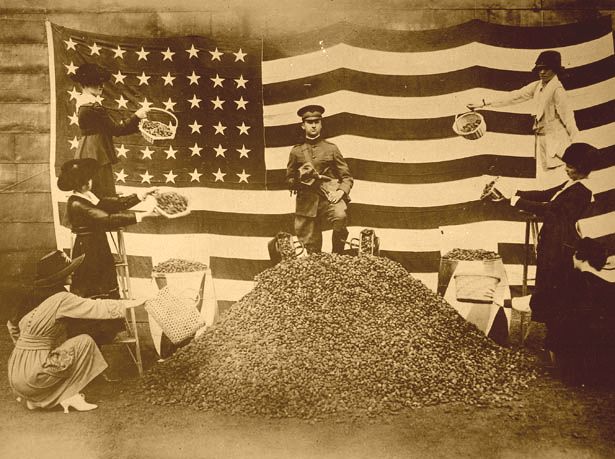 During World War I, the Germans blindsided the Allies with chlorine gas, a hellishly toxic chemical weapon. Once in the body, the yellow-green gas tortured and killed at the same time, causing asphyxiation, convulsions, panic, and a slow death. When the wind was just right, the Germans would release the gas and it would creep slowly over battlefields, finding its way into trench crevices and soldiers' lungs. It was something to be feared, but as American chemist James Bert Garner discovered in 1915, it could be subdued with activated charcoal, made from natural fibers such as those found in peach pits.

As explained in a passage from A History of the World War, here's how the gas masks worked:

The perfected gas masks used by both sides contained a chamber filled with a specially prepared charcoal. Peach puts were collected by the millions in all the belligerent countries to make this charcoal, and other vegetable substances of similar density were also used. Anti-gas chemicals were mixed with the charcoal. The wearer of the mask breathed entirely thorough the mouth, gripping a rubber mouthpiece while his nose was pinched shut by a clamp attached to the mask.

In training, soldiers were required to hold their breath for six seconds while the mask was being adjusted. It was explained to them that four breaths of the deadly chlorine gas was sufficient to kill; the first breath produced a spasm of the glottis; the second brought mental confusion and delirium; the third produced unconsciousness; and the fourth, death.

The chemical warfare spurred a nationwide call for peach pits and walnut shells, as the New York Times reported that same September. "A campaign will be launched here this week, and by holding contests in the schools, the Red Cross expects that every peach pit found by the children will be thrown at the Kaiser... In each state, several centers will be established for the reception of parcel post packages of seeds from Red Cross agents in smaller towns or from farmers and other persons who are unable to forward the seeds to their own chapters."

World War I was the first war to involve chemical warfare, and approximately 90,000 soldiers were killed by toxic gas alone. A recent RadioLab show chronicled the dark story of chlorine gas and its inventor, Fritz Haber, a German Jew who had earlier won a Nobel prize for synthesizing ammonia. After the war, he was also inadvertently involved in the creation of Zyklon-B—the poison used in Nazi gas chambers. (He invented it to be used as pesticide, and by the time the Nazis came around, he had left Germany for England.) His science created life, as ammonia became the basis for a boom in agricultural production, but his death gases also killed millions. And he, arguably, is the reason these women are posing throwing peach pits onto a pile beside an enormous American flag.