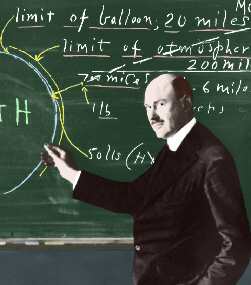 The greatest homegrown rocketry expert America ever produced, Robert Goddard had already patented the multi-stage rocket by 1914. When his country entered the Great War his services were referred to the Army Signal Corps by the Smithsonian Institution. By November 1918 he had developed a battlefield artillery rocket and a smaller man-carried missile, which in a later war would be the inspiration for the bazooka. But the war ended before the weapons could be put to use.

After the war, Goddard returned to his laboratory at Clark University in Massachusetts and developed the liquid-fueled rocket in 1926 and pursued high altitude flight, guidance systems, and the basics of space travel throughout his career. Today, NASA's Space Flight Center in Maryland bears his name. Goddard left us this most inspiring thought: "It is difficult to say what is impossible, for the dream of yesterday is the hope of today and the reality of tomorrow."