Eat Potatoes and “Spud” the Kaiser 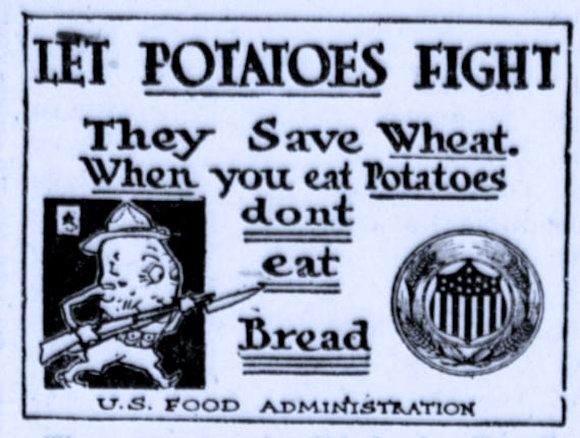 As the U.S. shifted to a wartime footing in 1917, the federal government developed a vigorous program to shift the nation’s eating habits away from wheat, which was being shipped to Europe to feed Allied troops. The U.S. Food Administration, which was being led by future president Herbert Hoover, made a patriotic appeal to “Save a Loaf a Week—Help Win the War.”

A variety of initiatives were launched to encourage citizens to cut back on the use of wheat, sugar, meat, and some other commodities to compensate for the millions of tons of wheat being shipped to Europe. One of those replacements was the potato.

Across the country, the population confronted posters, newspaper advertisements, an assortment of “victory cookbooks,” hundreds of recipes, and patriotic appeals to eat more potatoes and to cut back on bread and other wheat foodstuffs.

“Let Potatoes Fight,” declared one advertisement. “They save wheat when you eat potatoes.”

One wartime cooking book published some doggerel to promote an increased consumption of potatoes:

“Eat potatoes with their starch,

Help the fighters on their march.

Each potato that you eat,

Will help to fill the ships with wheat.

Eat potatoes, save the wheat,

Drive the Kaiser to defeat.”

One of the more creative patriotic appeals to consume potatoes emerged in Maquoketa, Iowa, where the Staack & Luckiesh pharmacy fashioned a window display that called on “Potatriots” to “Join the Ranks and Spud the Kaiser.” A squad of decorated potatoes was arrayed across the display and backed by a sign advising the viewer that “The Potato Is a Good Soldier: Eat It, Uniform and All.” 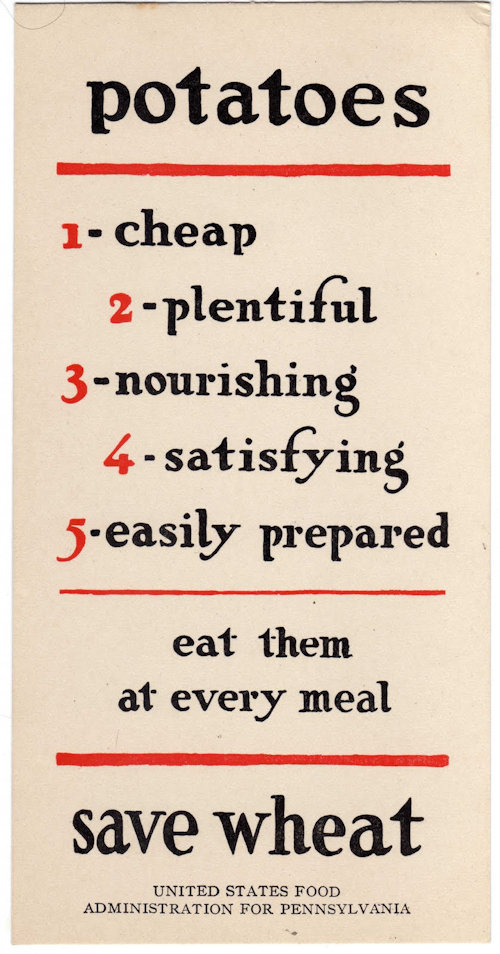 Feeding the People: The Politics of the Potato, by Rebecca Earle, Cambridge University Press, June 2020.