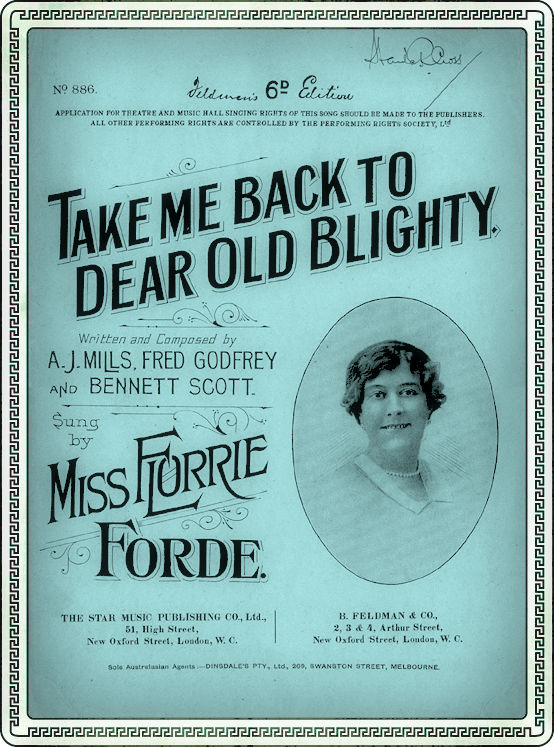 Blighty was, by the summer of 1915, one of the most prominent—and certainly the most evocative—of the new lexical items which had come to be associated with the war. Usefully for the Words in War-Time archive, it had, by this point, also prompted a series of articles in the daily press which explored—in considerable detail—a range of aspects of its meaning and use. Even if blighty was by no means "a pretty word," its expressiveness was undoubted, as the Daily Express proclaimed in July 1915: "In its inharmonious syllables there lies concentrated all the sentiment of 'Home, Sweet Home' and a hundred similar melodies." Blighty stands, it added, "for all that is beautiful," representing "what every mother’s son in the trenches hopes to see again."

Absent from the Oxford English Dictionary as it then existed in which the negatively connoted blight ("Any baleful influence of atmospheric or invisible origin, that suddenly blasts, nips, or destroys plants, affects them with disease, arrests their growth") was followed by words such as blighted, blighting, and blik), blighty’s lexicographical heritage can instead be located in Anglo-Indian and the diction of the colonial past. Henry Yule and A.C. Burnell provided, for example, an entry for the word bilayut (alternatively spelled billait) in Hobson-Jobson or, as its sub-title explained, A Glossary of Colloquial Anglo-Indian Words and Phrases, and of Kindred Terms; Etymological, Historical, Geographical and Discursive. Published in 1886, this has been described by Salman Rushdie as "the legendary dictionary of British India." Bilayut, as Yule and Burnett explained, was a word which, if deriving from wilāyat ("a kingdom, a province"), had, in recent years, "come to be employed for distant Europe." It signified absence, the sense of a familiar elsewhere from which the individual is, for whatever reason, separated. The forms billait or bilatee could likewise appear, as Hobson Jobson adds, in a range of items which connoted Europe rather than India, such as belatee panee—"European soda-water—which  had become "the usual name for soda-water in Anglo-India."

In 1915, etymological awareness of facts of this kind nevertheless remained somewhat hazy. "Etymologists will tell you that it is a corruption of the Hindustani word for Great Britain—Belati from belati pani,” the 'black water' which has to be crossed before Britain is reached," as the Daily Express article had confidently explained. While word history and derivation can hence be conspicuously awry, what remains true in the contemporary accounts of blighty which appear is the sense of a profound spatial (and cultural) divide which it involves, as well as the contrastive positioning of home and "other." Both forms and the original geographical components have, of course, changed by the summer of 1915; “Blightie is Tommy’s word for home in France," as an even earlier article—from May 1915—asserts. India is eclipsed by the new historical realities of conflict overseas, while the now anglicised blighty or blightie attests to an effective  process of  assimilation into English; the initial syllable of bilatee has, by ellipsis, yielded the more familiar English consonant combination bl-. An analogical pattern of respelling—on the basis of  blight—likewise underpins other aspects of this change in form. If, as other posts on this site explore, respelling as device  can be used to enhance a sense of the alien and ‘other’ in lexical loans from German as war advances, blighty follows a very different trajectory. As a range of comments in contemporary news discourse confirms, blighty or blightie is, by this point, popularly regarded not as part of Anglo-Indian but, as the Daily Express confirms, as fluent ‘Atkinese’ for “Home’. As in the extract below:

Tommy, crouching under the parapet of his trench while “whiz-bangs,” “coal-boxes,” “Jack Johnsons,” “woolly bears,” and all the rest of the infernal brood scream and crash around, has nothing to do but think “BLIGHTY”.

Thinking blighty—and what precisely this might involve—nevertheless remains a matter of some interest. If ‘Atkinese’ for home, this is clearly an emotional as well as geographical destination, as well as one which is able to be individualised anew by each and every soldier:

“To one man it stands for a creeper-covered cottage set amid the trees. To another a means a squalid tag-end of bricks and mortar in a mean street in a great city. To the kilty it stands for the moor and the heather … The word is “Blighty”

Blighty can, by the same token, also be a wider and generic destination, one which, as in the first example above, is seen in terms of nation and homeland, of Britain set against ‘somewhere in France’  or as against the ‘foreign’ as realised in Turkey or Mesopotamia, or the other diverse locales of war.

There is only one longing in the hospitals and it is the longing for home. A man with a bullet in this chest told hopefully how a soldier in the bed next to him … “went home yesterday”. His thought was not of the bullet, but of “Blightie” (Daily Express, 29 May 1915)

It is the word used to cheer up the wounded man, and it then you realise the magic of it. It brings a gleam to eyes dimmed with pain, and the wound that means torture becomes a heaven-sent reprieve—for few soldiers really believe that it is probable that they will ever reach home again, and indeed, for many Blighty never “rolls on” … When Blighty lies at the end of it, the slow, laboured progress of a stretcher party becomes a triumphal procession.

Here, Blighty’s initial capital affirms its identity as a proper noun, in what is another creative renaming of place. If, as a number of writers note, it thereby operates, on one level, as a simple synonym of ‘Britain’ or ‘England’ or ‘Scotland’ (depending on the point of view assumed), it nevertheless remains, as the examples above suggest, more than just a place on a map, or the physical terrain this might occupy. As here, in being Blighty—as a place of desire and longing—it is also defined by what it is not, whether in terms  of peace and protection rather than danger, or of warmth and comfort rather than deprivation.

Further shades of meaning accrue around other uses it acquires. As in the context of injury and war-wounds illustrated above, blighty's role as recuperative destination in productive of other shifts in meaning and use. Very serious wounds sustained on the battlefield might prevent immediate repatriation. Others, in contrast, might  enable the soldier in question to return to blighty for a period of treatment and convalescence. Minor wounds, conversely, could merely put one temporarily out of action, without necessitating a return home at all. The kind of semantic short-cut by which certain wounds popularly came to be designated blighty wounds is clear; blighty in this sense can be noun or adjective (a blighty wound, a blighty, a blighty bullet i.e. a bullet which yields an injury of such a level that a return home is both feasible and advised).

A "blighty” is “a wound that is bad enough to get you home," as Andrew Clark, collecting words and evidence on words in 1915, was informed in a letter from the ‘territorial chaplain’ of the London Regiment in Saffron Walden on 31 August. Here, blighty’s intial capital has disappeared, while syntax, too, confirms a shift of use from the wider sense of Blighty = home, homeland, or Britain per se. “A blighty or a "blighty wound” (in which blighty becomes adjective as well noun) requires an indefinite article; in contradistinction, as in the popular idiom ‘roll on Blighty’, no article of any kind appears. “We may yet hear the greatest of all songs rendered as “There’s no place like Blighty,”' as a later article in the archive, here from November 1916, suggests in a similar mode.

Change of this kind was accompanied by other patterns of diffusion. In 1915, blighty could, of course, be seen as ‘the soldier’s word for home’; it is a word ‘used by soldiers on foreign service’, as the later entry which appeared in 1933 in the OED Supplement  affirmed. Yet, as the Words in War-Time archive suggests,  blighty’s perceived salience was, by 1916, already seen rather differently. ‘This great struggle’, and the ways in which it has come to ‘affect so many men and women of all classes’ meant that ‘many of the words and phrases directly associated with the war and its nomenclature’ will merge ‘into our every day speech and conversation … ultimately forming part of the English language’, the Daily Mail would, for example, predict on November 1st 1916. Blighty was, it stressed, a prime example of this transition—a word which would endure beyond the immediate contexts of war, and not least in terms of its on-going diffusion from ‘soldier’s word’ into far wider patterns of use on the home front.