One of the most interesting documents brought forth about the war was issued on 17 September in London. It was signed by 53 of the leading British writers. Herewith are presented the text of their defense of England and their autograph signatures in facsimile. Some of the best -known authors who signed included James Barrie, Hilaire Belloc, G.K. Chesterton, Arthur Conan Doyle,  John Galsworthy, Thomas Hardy, Rudyard Kipling, G.M. Trevelyan, and H.G. Wells. The Irish poet William Butler Yeats declined to sign.

The undersigned writers, comprising among them men of the most divergent political and social views, some of them having been for years ardent champions of good-will toward Germany, and many of them extreme advocates of peace, are nevertheless agreed that Great Britain could not without dishonor have refused to take part in the present war. No one can read the full diplomatic correspondence published in the "White Paper" without seeing that the British representatives were throughout laboring whole-heartedly to preserve the peace of Europe, and that their conciliatory efforts were cordially received by both France and Russia.

When these efforts failed Great Britain had still no direct quarrel with any power. She was eventually compelled to take up arms because, together with France, Germany, and Austria, she had solemnly pledged herself to maintain the neutrality of Belgium. As soon as danger to that neutrality arose she questioned both France and Germany as to their intentions. France immediately renewed her pledge not to violate Belgian neutrality; Germany refused to answer, and soon made all answer needless by her actions. Without even the pretense of a grievance against Belgium she made war on the weak and unoffending country she had undertaken to protect, and has since carried out her invasion with a calculated and ingenious ferocity which has raised questions other and no less grave than that of the willful disregard of treaties.

When Belgium in her dire need appealed to Great Britain to carry out her pledge, that country's course was clear. She had either to break faith, letting the {83}sanctity of treaties and the rights of small nations count for nothing before the threat of naked force, or she had to fight. She did not hesitate, and we trust she will not lay down arms till Belgium's integrity is restored and her wrongs redressed.

The treaty with Belgium made our duty clear, but many of us feel that, even if Belgium had not been involved, it would have been impossible for Great Britain to stand aside while France was dragged into war and destroyed. To permit the ruin of France would be a crime against liberty and civilization. Even those of us who question the wisdom of a policy of Continental ententes or alliances refuse to see France struck down by a foul blow dealt in violation of a treaty.

We observe that various German apologists, official and semi-official, admit that their country had been false to its pledged word, and dwell almost with pride on the "frightfulness" of the examples by which it has sought to spread terror in Belgium, but they excuse all these proceedings by a strange and novel plea. German culture and civilization are so superior to those of other nations that all steps taken to assert them are more than justified, and the destiny of Germany to be the dominating force in Europe and the world is so manifest that ordinary rules of morality do not hold in her case, but actions are good or bad simply as they help or hinder the accomplishment of that destiny.

These views, inculcated upon the present generation of Germans by many celebrated historians and teachers, seem to us both dangerous and insane. Many of us have dear friends in Germany, many of us regard German culture with the highest respect and gratitude; but we cannot admit that any nation has the right by brute force to impose its culture upon other nations, nor that the iron military bureaucracy of Prussia represents a higher form of human society than the free Constitutions of Western Europe.

Whatever the world destiny of Germany may be, we in Great Britain are ourselves conscious of a destiny and a duty. That destiny and duty, alike for us and for all the English-speaking race, call upon us to uphold the rule of common justice between civilized peoples, to defend the rights of small nations, and to maintain the free and law-abiding ideals of Western Europe against the rule of "Blood and Iron" and the domination of the whole Continent by a military caste.

For these reasons and others the undersigned feel bound to support the cause of the Allies with all their strength, with a full conviction of its righteousness, and with a deep sense of its vital import to the future of the world. 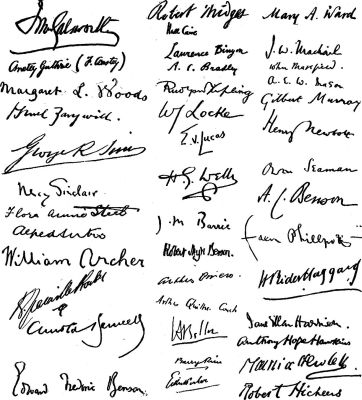