One of the War's Big Losers: Bulgaria 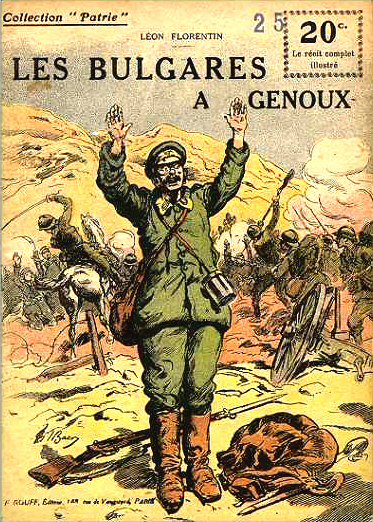 Slavic, Orthodox Bulgaria played a role in World War I completely out of proportion to its size. Overlooking their historic hatred of the Turk and past allegiance to Slavic Russia, they entered the Great War in 1915 on the side of the Central Powers with the single objective of reversing the territorial settlements of the 1912–13 Balkan Wars. A nation of less than five million, Bulgaria mobilized an army of 1.2 million soldiers. These troops helped force the Serbian Army to abandon their own country, drove the French and British expeditionary forces back to the Salonika perimeter, participated in the defeat of Rumania, and, for the last year of the war, were the principal sentinels at the Balkan "back door" into central Europe. But playing a major role in a world war proved exhausting for the small country. By the spring of 1918, food shortages become severe at home and Bulgarian troops had to subsist on a barley bread with straw filler. On 29 September 1918, after their forces collapsed under pressure on the Salonika Front, Bulgaria became the first Central Power to sign an armistice. In three years of war the Bulgarian forces lost a quarter of a million men killed, wounded, or captured.

The Salonika, or Macedonian, Front is mostly neglected today, except by specialists. But consider: almost all the war's combatants sent forces to the theater; three-quarters of a million men were deployed along its 170-mile front; even down to the 21st century it remains the greatest focal point of debate between the war's "Easterners" and "Westerners," and, undeniably, it was the front where the final collapse of the Central Powers began.

Anglo-French forces began landing at the Greek port of Salonika on 5 October 1915. The troops were sent to provide military assistance to the Serbs, who were threatened by combined German, Austro-Hungarian, and Bulgarian armies. The intervention came too late to save Serbia, and after a brief winter campaign in severe weather conditions on the Serbian frontier, the Anglo-French forces found themselves driven back to a small perimeter around Salonika. At this point, the British advised that the troops be withdrawn. However, the French, with Russian, Italian, and Serbian backing, still believed something of strategic importance could be gained in the Balkans.

After preparing the port of Salonika for defense, the troops moved up country. During 1916, further Allied contingents of Serbian, Italian, and Russian troops arrived, and offensive operations began. These culminated in the fall of Monastir to Franco-Serbian forces during November. A second offensive during the spring of 1917 made little impression on the Bulgarian defenses.

After Georges Clemenceau became premier, theater commander Maurice Sarrail was sacked in December 1917 and replaced first by Marie Louis Guillaumat and in the spring of 1918 by Franchet d'Espèrey, who had been advocating an offensive in the region since 1914. He proved himself the right man for the job by launching a series of decisive attacks that resulted in the surrender of Bulgaria on 30 September 1918.

Despite the precipitous Bulgarian collapse and the abdication of King Ferdinand, Franchet d'Espèrey continued to advance in accord with the plan he drew up in 1914. Allied forces were to drive toward the Danube and Budapest. These dispositions did not coincide with either French or British policy and were bitterly opposed by the Italians, who had territorial claims. The French public wanted immediate peace, not a continuation of war in the Balkans. Lloyd George pressed to have the British contingent hived off for a drive on Constantinople under the command of General Allenby. In the end, Franchet d'Espèrey was ordered to liberate Serbia while the British army with French and Italian elements under Lt. General George Milne advanced on Constantinople. The Ottoman Turks, however, capitulated before the British reached their frontiers.

Sources: The Salonika Campaign Society; OVER THE TOP, August 2008