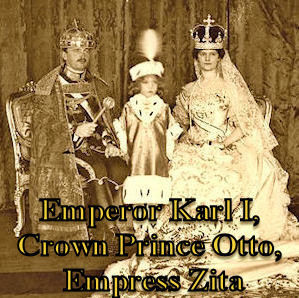 Karl I was the last ruler of the Austro-Hungarian monarchy (21 November 1916 -11 November 1918). A grandnephew of the emperor Franz Joseph, Karl became heir presumptive to the Habsburg throne upon the assassination of his uncle, Franz Ferdinand. After his accession, he made a series of attempts to take Austria- Hungary out of World War I through secret overtures to the Allied powers. His effort was the first in a series of ill-fated peace initiatives and gestures in 1917.

As early as 1915, in uniform on the Eastern Front and still heir to the throne, Karl was losing his earlier enthusiasm for the war. He let it be known he would be happy if Austria-Hungary concluded a separate peace with Russia status quo ante bellum. On the eve of his succession he expressed doubts about the endurance of his own army and that peace would have to be concluded in any case when it soon ran out of men. He enthusiastically endorsed a German peace feeler, but knew it was doomed because it was “too demanding regarding territorial conquests.” Karl ascended to the throne determined to use his new powers to seek peace. Soon after, he learned of impending food shortages, especially for cereals and potatoes, due to poor harvests, the turmoil in Galicia, and domestic distribution issues. Shortages of all kinds were especially bad in his capital, Vienna. Buried in his accession manifesto is this revealing sentence: “I want to do everything to banish the horrors and sacrifices of the war as soon as possible, and to win back for my peoples the sorely missed blessings of peace.”

With this determination to pursue peace, he chose to act in secret using his own brother-in-law, Prince Sixtus von Bourbon-Parma, a serving officer in the Belgian Army, as the lead intermediary. The core points of the Emperor's proposal were a peace based on the restoration and compensation of Belgium, a peace with Russia in return for Russia's declaration that it held no claim to Constantinople, the re-establishment of Serbia with an outlet on the Adriatic, and support of the "just" claims of France in Alsace-Lorraine.

All of Karl's efforts failed because Germany effectively held veto power over any military settlement, resistance from his foreign ministry, and his own refusal to cede the Sud Tyrol (Trentino) to Italy. His secretive effort blew up in the spring of 1918, when French prime minister Clemenceau publicly confirmed the substance of the discussions, much to Karl's embarrassment. Nonetheless, all the would-be peace efforts of 1917 were doomed. The belligerents were not ready for it.