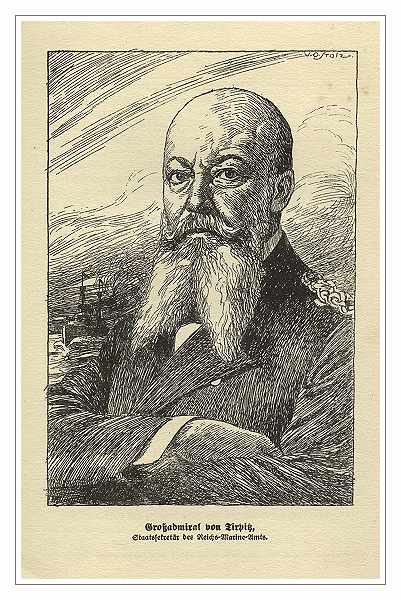 In 1897, Admiral Alfred von Tirpitz (1849–1930) was named Germany's Secretary of State for the Navy. The next year he introduced the first of four "Fleet Acts" to authorize construction of a fleet capable of challenging Britain's Royal Navy. not world-wide since  German lacked overseas coaling stations, but in the zone between Heligoland and the Thames. The Kaiser endorsed the program. Over the next two years, Tirpitz and his staff refined their plans and in 1900 a 17 year program was set for  building a fleet of capital ships.

Naturally, the British government recognized the threat to their interest and eventually the famous "Battleship Race" ensued. Tirpitz eventually realized that given the lead the Royal Navy enjoyed in number of battleships, Germany would be vulnerable to a preemptive attack. In 1909 Tirpitz recognized a “Danger Zone”  of  about five years before Germany would have sufficient ships, and the infrastructure to support operations to meet  a British challenge.

Tirpitz listed the five major works that had to be completed if any hostilities would begin:

3)  The construction of the required harbor facilities for the increased number of dreadnought-type battleships of the High Seas fleet on Germany’s North Sea coast.

5)  And the most required, to assure rapid connection with the Baltic Sea and the threat of Russian naval operations, the completion of the widening of the Kiel Canal scheduled for June 1914

Most of the objectives were met. By the start of the First World War, Britain had 20 commissioned dreadnoughts and nine battlecruisers, compared with Germany's 15 commissioned dreadnoughts and seven battlecruisers. The infrastructure was mostly completed with the expanded Kiel Canal opening on schedule. However, Tirpitz neglected U-boat construction, and this worked to Germany's disadvantage both in 1914 and when unlimited submarine warfare—which he strongly supported—was resumed in 1917.

Thanks to Bob Denison for much of the detail in this article.