Anniversary of the French 1870 Defeat at Sedan

Tomorrow, 1 September, is the 144th anniversary of the French defeat at Sedan during the Franco-Prussian war. The next day, Emperor Napoleon III was taken into custody. Since this was a major event in the run-up to the Great War, I thought a bit of a primer on that 19th-century war was in order. 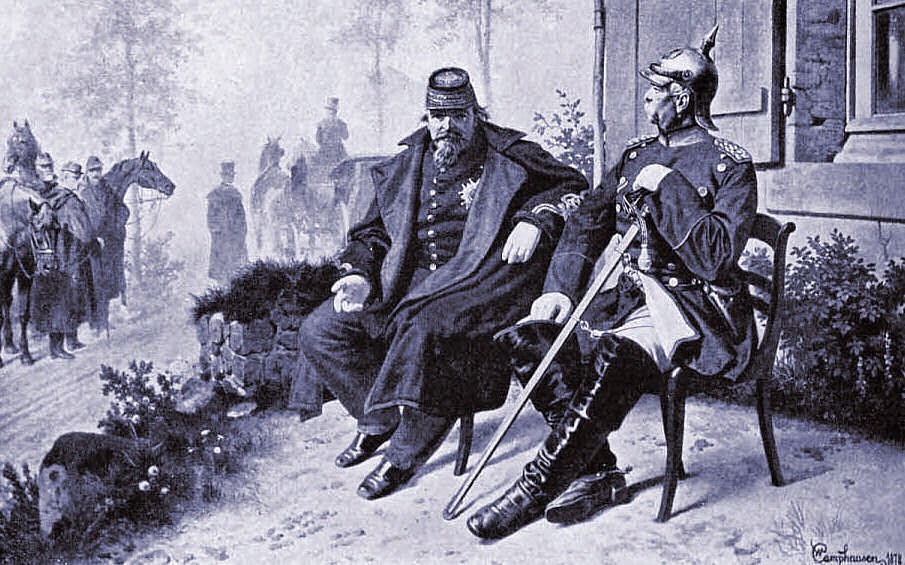 Famous Depiction of the Captured Emperor with Bismarck

Where: Northeast France, inclusive of Paris


Immediate Cause: Diplomatic maneuvering surrounding the candidacy of Prince Leopold of Hohenzollern-Sigmaringen for the Spanish throne, which raised the possibility of an alliance of Prussia and Spain vs. France. Bismarck thus provoked France into declaring war; most other German states joined Prussia.

Hostilities: Superior tactics, organization, and weaponry resulted in an early series of victories culminating in the surrender of French Emperor Napoleon III at the Battle of Sedan. The struggle, however, continued due to considerable French resistance. Paris underwent a siege and an insurrection that established the short-lived Paris Commune while numerous battles and irregular actions were fought in the countryside.

Results: French dominance of continental Europe ended, a unified German empire under Wilhelm I was created, and under the peace treaty France was forced to pay a large indemnity and cede Alsace and much of Lorraine to Germany.