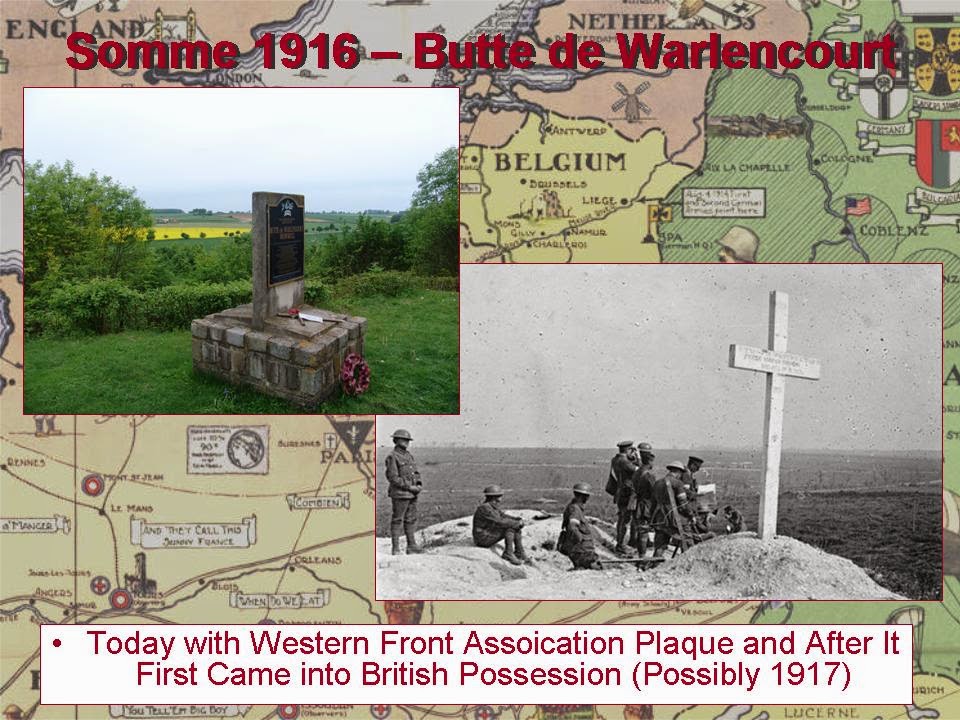 The Butte de Warlencourt, a prehistoric burial mound on the side of the Albert to Bapaume Road, was, during the 1916 Battle of the Somme, a position of great strength for the Germans. It was fortified with barbed wire, riddled with tunnels, defended by machine guns and mortars, and stood as a sentinel in front of the major German trenches called Gird Trench and Gird Support.

As the British Army clawed its way forward over the Somme battlefield during the summer of 1916, the Butte, standing several hundred feet higher than the surrounding countryside, was of immense value to the Germans. By late September 1916 the front line had been pushed toward the village of Le Sars. A large-scale assault by seven British and Commonwealth divisions was planned for 1 October; one of the objectives was to be Eaucourt l'Abbeye, which was directly overlooked by the Butte. The units involved in the attack here were from the 47th (London) Division and 50th (Northumbrian) Division. The commanding officer of the 1/6th Durham Light Infantry (DLI) was wounded, so the 1/9th DLI, who were in support, came up. The commanding officer of the 1/9th DLI was Lt Colonel Roland Boys Bradford, who was awarded the Victoria Cross. The citation reads as follows:

For most conspicuous bravery and good leadership in attack, whereby he saved the situation on the right flank of his Brigade and of the Division. Lieutenant-Colonel Bradford's Battalion was in support. A leading Battalion having suffered very severe casualties, and the Commander wounded, its flank became dangerously exposed at close quarters to the enemy. Raked by machine-gun fire, the situation of the Battalion was critical. At the request of the wounded Commander, Lieutenant-Colonel Bradford asked permission to command the exposed Battalion in addition to his own. Permission granted, he at once proceeded to the foremost lines. By his fearless energy under fire of all description, and his skilful leadership of the two Battalions, regardless of all danger, he succeeded in rallying the attack, captured and defended the objective, and so secured the flank.

For much of the rest of October 1916 various British divisions were rotated through the trenches overlooked by the Butte. An attack toward the Butte was made on 7 October when the village of Le Sars was taken.

It was not until 5 November that an all-out effort was made to take the Butte. This was undertaken by the 7th, 8th, and 9th (DLI) of the 50th (Northumbrian) Division.

The attack by the Durhams was undertaken in appalling conditions. Despite heavy casualties, the 9th Durhams managed to take the Butte, only to be driven off by German counterattacks. Casualties in the three battalions amounted to 273 men killed plus many other wounded (over 80 of the fatalities are now buried in the nearby Warlencourt British Cemetery.)

Other than its brief capture by the DLI, the Butte remained under German control throughout 1916. It was not until the German retirement to the Hindenburg Line in February 1917 that the Butte passed into British hands.