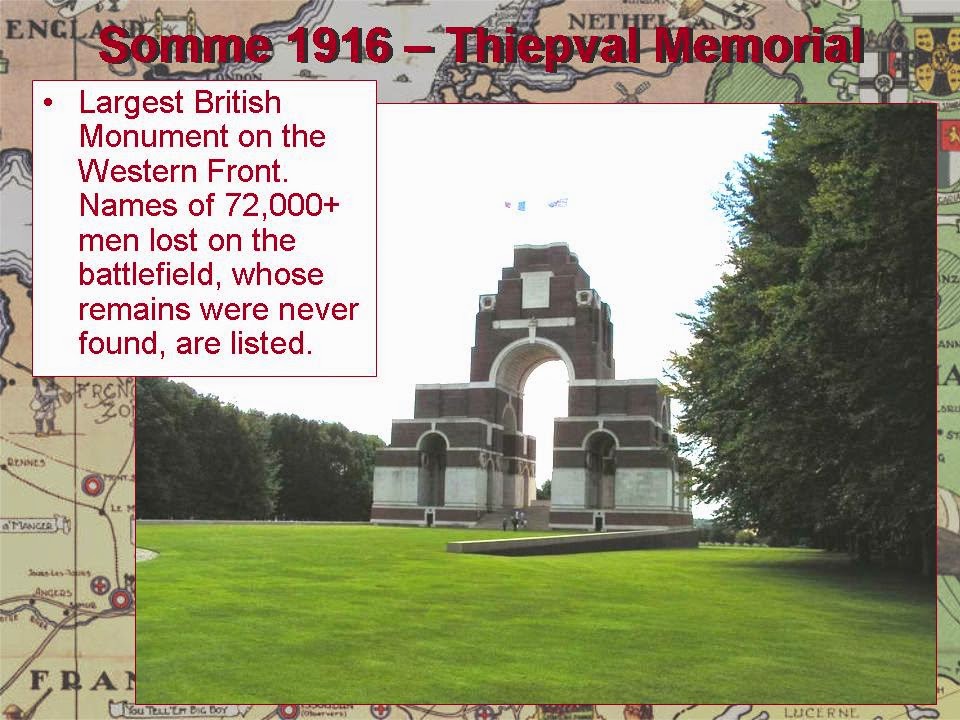 Built on the site of the former Thiepval Chateau. The huge brick structure, which dominates the rural scene, has 16 piers faced with Portland stone and is 150 feet (46m) high. It has foundations 19 feet (6m) thick, required due to extensive tunneling beneath the structure. Designed by Sir Edwin Lutyens, the memorial was built between 1928 and 1932 and is the biggest British battle memorial in the world. Over 72,000 names are listed on the memorial — all men who were lost in the Battle of the Somme, but whose remains were never discovered.

The French Tricolor also flies over the memorial. In addition to being a Memorial to the missing, Thiepval is also a battle memorial commemorating the Anglo-French offensive on the Somme in 1916 and is sited on top of the hill that was one of the major objectives . In recognition of the joint nature of the Allied endeavors in 1916, an Anglo-French cemetery is laid out in front of the Memorial with equal numbers of French and British burials (300 each). The Memorial is the largest ever built by the Commonwealth War Graves Commission. A major remembrance ceremony is held there each year on 1 July (the first day of the Battle of the Somme). There is a visitor center at the site which aims to tell the story of the battle, rather than any of the men who fought in this battle.

On 1 July 1916 in the opening of the Battle of the Somme, the 32nd British Division was utterly devastated and repulsed in their effort to take this position. It was not until the following 26 September that the chateau and village were finally cleared by the 18th Division.