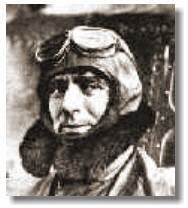 Edward Steichen (1879–1973) was a photographic innovator renowned for his painterly photography before the Great War. He is credited with being one the individuals most responsible for turning photography into an art form. He also became one of the greatest innovators of military, specifically aerial, photography. Below are some works from the war credited to Steichen personally during his service as chief of the photographic section of the U.S. Air Service.

During the Second World War Steichen returned to the colors, but with the U.S. Navy, when he directed the Navy's combat photographers.