Paul Bolo — also known as Bolo Pasha — was executed as a French traitor in April 1918. 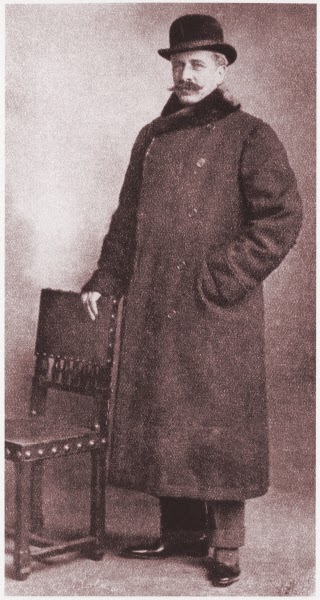 Bolo's story is a bizarre one.  A French citizen, he was born in Reunion and spent much of his youth in France. His adult life prior to the opening of hostilities in 1914 appears to have been spent as a full-fledged member of the underworld, operating in France as a confidence trickster.

With the First World War under way, Bolo decided upon a confidence operation of surprising audacity, although he conceivably believed in the cause he espoused.  In February 1915 he persuaded the Khedive of Egypt that the French public could be convinced of the merits of peace were he, Bolo, successful in raising substantial funds from Germany in order to aid the press campaign he had in mind.

Thus Bolo spent a good deal of 1915–16 in traveling between the U.S. and Europe while employed by the Khedive. Subsequent inquiries revealed that Bolo had amassed a small fortune amounting to some £300,000 from a variety of German sources.

Ultimately found out by the French authorities, Bolo was arrested while in Paris in September 1917.  He was promptly charged with obtaining funds from a national enemy for the purpose of establishing a pacifist movement in France — a crime punishable by death.

Found guilty of the charge and proclaimed a traitor Bolo was duly shot by firing quad at Vincennes fort on 17 April 1918.

After the execution, Georges Clemenceau, the prime minister of France, addressed the American people, whom he apparently thought a little naive regarding characters such as Bolo:


This Bolo Pasha, who had had his way with everybody and in almost every situation, had met a strong man at last! Bolo Pasha was one of those gentlemen who began life by betraying women; he ended it by betraying nations. There is a great difference between betraying women and betraying nations! Women forgive and forget, but nations never, never! And so at the conclusion of their little interview Mr. Clemenceau escorted Bolo Pasha to the Forest of Vincennes, and placing him with his back to a wall, compelled him to face the business end of twelve French rifles. Bolo Pasha will never betray another nation. I want to tell you Americans that that is the only way to treat a traitor!