Highlights from "Perspectives on the Great War," World War One International Conference 1– 4 August 2014 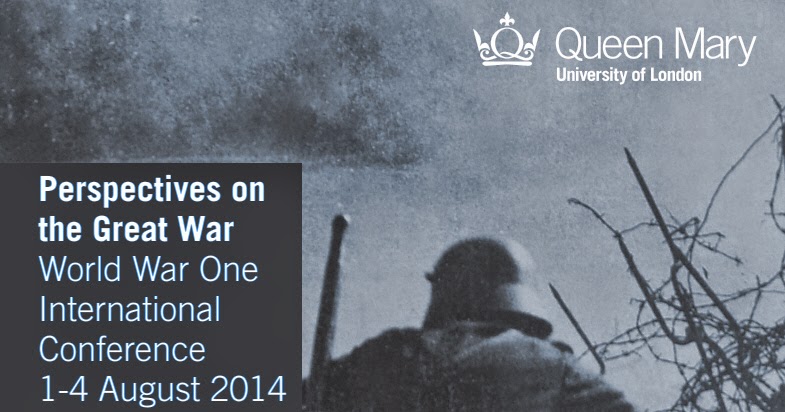 
Two hundred participants, including 140 speakers, gathered at Queen Mary’s College, University of London, to reflect on issues as diverse as the causes of the war, the situation in Europe at the beginning of the 20th century, different ways of representing the war, the consequences for Europe and the world at large of the events of 1914–18, and how the war is understood today. Some of the most important names in World War One scholarship were present: Professor Christopher Clark (Cambridge University), Professor Michael Epkenhans (Institut für Militärgeschichte), David Stevenson (London School of Economics and Political Science) and Professor Jay Winter (Yale University).


An ongoing theme was the importance of a transnational approach to World War One. Jay Winter argued that today we belong to the Fourth Generation of World War One scholars who wish to widen the scope of scholarship from battles, social effects, and the story of the individual to the story of war that incorporates North America, Africa, and India more closely. Winter exemplifies this view in his latest study, The Cambridge History of the First World War (Listen to an interview with Jay Winter about his book on http://www.youtube.com/watch?v=PFiGwzj8Uvw). The transnational perspective was also advocated by Christopher Clark, who claimed that by adopting such an approach we are better able to understand the similarities between our world today and that of 1914–18. Clark referred to his most recent publication, The Sleepwalkers: How Europe Went to War in 1914.


In addition to excellent keynote speeches a number of lesser known scholars presented their research on more obscure aspects of the war. One of the most outstanding presentations was that given by a South African scholar, Gerhard Genis, who has uncovered and analyzed a number of poems written by South African soldiers. Another fascinating presentation was James Wallis’s introduction to the Imperial War Museum’s new exhibition, which is lavishly cataloged in Paul Cornish’s "The First World War Galleries".The exhibition contains interesting exhibits on pacifism, much to this correspondent’s joy!

The 2014 conference is to be followed up in 2016 by a smaller event focussing on Belgium and World War One. This will also be hosted by Queen Mary’s College, London University.