In this prewar photo that perfectly captures the Kaiser's militaristic enthusiasms, he is inspecting a Guards detachment, probably at Potsdam. As Wilhelm marches past, each of the soldier's heads snaps forward from the "eyes-right" position. Like their British equivalents, the "Old Contemptibles," most of these men were probably killed or wounded in the coming war.


[The Kaiser] is like a battleship with steam up and screws going, but with no rudder, and he will run into something some day and cause a catastrophe. He has the strongest army in the world and the Germans don't like being laughed at and are looking for somebody on whom to vent their temper and use their strength...Now it is 38 years since Germany had her last war, and she is very strong and very restless, like a person whose boots are too small for him. I don't think there will be war at present, but it will be difficult to keep the peace of Europe for another five years.

In May 1910 Theodore Roosevelt was America's representative at the funeral of Edward VII in London. This brought him into personal contact with almost all the monarchs of Europe including the Kaiser and Archduke Franz Ferdinand. He later reported:

Not only all the kings I had met, but the two or three I had not previously met, were more than courteous, and the Kaiser made a point of showing his intimacy with me and of discriminating in my favor over all his fellow sovereigns. The only man among the royalties who obviously did not like me was the Archduke Ferdinand, who is an ultra-montane, and at bottom a furious reactionary in every way, political and ecclesiastical both.

Later at a reception for the kings and various ambassadors he encountered Wilhelm at his rudest.

Well, the Czar and the Archduke came to London on the same express train. The Czar’s private carriage was already on it, and the archduke had his put on at Vienna. Each wished to have his carriage ahead of the other, but the archduke triumphed and had his placed nearest the engine, the czar’s carriage coming next, and then the dining car. The archduke was much pleased at his success, and rode next the engine in purple splendor; and all went well until dinner time, when he sent word to the czar saying that he should like to walk through his carriage to the dining saloon, and the czar sent back word that he could not! Accordingly, breathing stertorously [sic], he had to wait until a station came, get out and get into the dining saloon, and after eating his dinner wait until another station was reached, get out again, and pop back into his own carriage. This struck all his brother royalties as a most serious matter, and the German Emperor had heatedly sided with the Austrians. Accordingly, while I was talking to the Czar, the Emperor suddenly walked up to us, thrust himself in ahead of the Czar, turned his back square to him and said to me: ‘Roosevelt, my friend, I want to introduce you to the King of Spain'; (then with a sudden ferocious glance over his shoulder at the Czar) ‘he is worthwhile talking to!’” 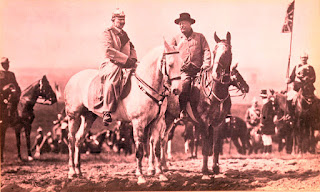 Afterward, Roosevelt continued on to Berlin as part of the lecture series he had begun when Edward VII had died. The Kaiser not only attended his lecture but invited the president to attend military maneuvers. Roosevelt was greatly impressed by the Kaiser's zest for things military. He later explained why he had strongly encouraged America's preparedness effort after war broke out in 1914.

At the invitation of Kaiser Wilhelm, I attended the spring maneuvers of the German Army. If you had heard and seen what I saw you would feel just as I do.