Paul Thomas Mann (1875–1955) was a German novelist, short story writer, social critic, philanthropist, essayist, and the 1929 Nobel Prize in Literature laureate. Mann wrote the essay,“Reflections of a Nonpolitical Man” during the First World War. A riposte to his brother Heinrich’s criticism of Germany and the war, Mann’s essay justified the authoritarianism and inward “culture” of Germany against the moralistic “civilization” and democracy of England and France. Published in 1918, Mann later repudiated the ideas espoused here. 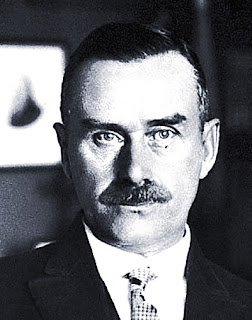 I met the New Passion, then, as democracy, as political enlightenment and the humanitarianism of happiness. I understood its efforts to be toward the politicization of everything ethos; its aggressiveness and doctrinary intolerance consisted – I experienced them personally – in its denial and slander of every nonpolitical ethos. “Mankind” as humanitarian internationalism; “reason” and “virtue” as the radical republic; intellect as a thing between a Jacobin club and Freemasonry; art as social literature and maliciously seductive rhetoric in the service of social “desirability”; here we have the New Passion in its purest political form as I saw it close up. I admit that this is a special, extremely romanticized form of it. But my destiny was to experience it in this way; and then, as I have already said, it is always at any moment on the verge of assuming this form: “active intellect,” that is: an intellect that is “resolved” to be active in favor of enlightened world liberation, world improvement, world happiness, does not long remain “politics” in the more abstract, figurative sense; it is immediately so in the strict, real sense as well. And – to ask the question again foolishly – what kind of politics is this? It is a politics that is hostile to Germany. This is obvious. The political spirit that is anti-German as intellect is with logical necessity anti-German as politics.

When, in the following pages, I have held that democracy, that politics itself, is foreign and poisonous to the German character; when I have doubted or argued against Germany’s calling to politics, I have not done so – personally or impersonally – with the laughable purpose of spoiling my nation’s will to reality, of shaking its belief in the justice of its international claims. I myself confess that I am deeply convinced that the German people will never be able to love political democracy simply because they cannot love politics itself, and that the much decried “authoritarian state” is and remains the one that is proper and becoming to the German people, and the one they basically want. A certain amount of courage is required today to express this conviction. Nevertheless, in doing so, I not only intend no derogation of the German nation in the intellectual or in the moral sense – I mean just the opposite – I also believe that its will to power and worldly greatness (which is less a will than a fate and a world necessity) remains completely uncontested in its legitimacy and its prospects.

There are highly “political” nations – nations that are never free of political stimulation and excitement, that still, because of a complete lack of ability in authority and governance, have never accomplished anything on earth and never will. The Poles and the Irish, for example. On the other hand, history has nothing but praise for the organizing and administrative powers of the completely nonpolitical German Nation. When one sees where France has been brought by her politicians, it seems to me one has the proof in hand that at times things do not work at all with “politics”; and this is turn is a sort of proof that things can also work in the end without “politics.” Therefore no misunderstanding should arise when people like me declare the political spirit to be an alien and impossible spirit in German. What provoked the deepest element in me, my national instinct, was the cry for “politics” in that meaning of the word that belongs to the intellectual sphere: it is the “politicization of the intellect,” the distortion of the concept of intellect into that of reforming enlightenment, of revolutionary humanitarianism, that works like poison and orpiment [arsenic] on me; and I know that my disgust and protest is not something insignificantly personal and temporary, but that here the national character itself is speaking through me. Intellect is not politics. As a German, one does not have to be bad nineteenth century to fight to the death for this “not.” The difference between intellect and politics includes that of culture and civilization, of soul and society, of freedom and voting rights, of art and literature; and German tradition is culture, soul, freedom, art, and not civilization, society, voting rights, and literature. The difference between intellect and politics, as a further example, is the difference between cosmopolitan and international. The former concept comes from the cultural sphere and is German; the latter comes from the sphere of civilization and democracy and is – something quite different. The democratic bourgeois is international, even though he may drape himself everywhere ever so nationally; the burgher, also a motif of this book – is cosmopolitan because he is German, more German than princes and “nation”: this man of the geographical, social, and spiritual “middle” has always been and remains the bearer of German intellectuality, humanity, and antipolitics.