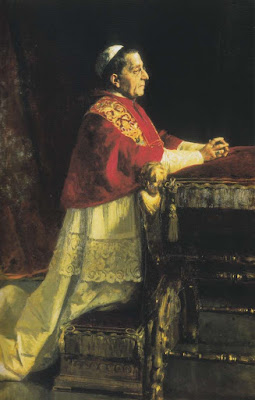 One the tireless workers for peace during the Great War was Pope Benedict XV, who was elected to office a month after the beginning of hostilities.  Benedict was concerned with the conflict especially as it configured Catholic countries such as Austria against Catholic countries such as Italy—enough so that on 1 November 1914 he issued his first encyclical on the war, "Ad Beatissimi." It simply called for both sides to cease fighting, a simplicity disparaged by this comment in one Allied paper: "It is really difficult to believe that this was actually written in the year 1914; it sounds like the utterance of an elderly gentlewoman of about the year 1830."

The Pope, nevertheless, continued his peace efforts throughout the war, but one event undermined the credibility of his effort, especially in Italy which had joined the war in May 1915. On 2 August 1916 the Italian dreadnought Leonardo da Vinci exploded in the harbor of Taranto. There was considerable loss of life and inquiries seemed to point to sabotage. (Today, it is believed it may have been due to an accident during the loading of ammunition, as with the Port Chicago disaster of 1944.)

Investigations into the sinking of Leonardo da Vinci and some suspicious earlier cases of sabotage led to Monsignor Rudolf Gerlach, Benedict's Keeper of the Robes and a native Barvarian. Despite disclaimers by him and by Benedict, his espionage and fund raising efforts for Imperial Germany were uncovered during the investigation into the battleship incident; he was turned over to Italian authorities and they in turn expelled him across the border into Switzerland. Papal commentor Frank J. Coppa wrote of the impact of this espionage scandal: "Although a court of inquiry exonerated the Vatican in any complicity in the Monsignor's schemes and spying, the "Gerlach Affair" rocked the Vatican, sent Pope Benedict into a spiral of depression, and seriously compromised the papal image of strict impartiality."