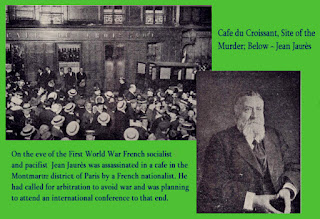 Jean Jaurès was a socialist and French nationalist who found in the French Revolution a universal message. He was fervently antiwar and was the one man in the powerful socialist movement who could speak for European workers whatever their nationality. His oratorical power was legendary. In the summer of 1914, Jaurès tried to rally the forces of international socialism against going to war, but events were moving to fast for him to do anything about it. He was assassinated in a Paris café days before war broke out by a crazed nationalist fearful of Jaurès's power to prevent France from going to war.