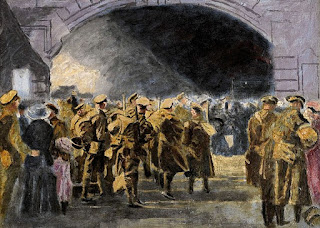 This rare painting by Sir Winston Churchill, titled "Troops Going to the Front,", sold at auction for £461,000 ($711,400) at Sotheby's London in June. Churchill painted "Troops Going to the Front'" in 1927, inspired by a photograph taken by F.J. Mortimer ten years earlier. The canvas shows soldiers waving farewell to their loved ones at Victoria Station in London as they leave to join the war. Churchill himself served on the Western Front in 1916.