The Maryhill Stonehenge is a replica of Stonehenge located in Maryhill, Washington, overlooking the Columbia River. It was commissioned in the early 20th century by businessman Samuel Hill and was dedicated on 4 July 1918 as a memorial to the citizens of Klickitat County,who would die in World War I. The memorial was completed in 1929. It is constructed of concrete. Because of its pre-Armistice dedication it is considered America's first memorial to the fallen of the war. Six names of Klickitat County soldiers were included at the monument immediately upon its dedication and seven more were added before the Armistice.

After a 1995 restoration of the site, Maryhill Museum Director Josie De Falla said that the memorial "assists in communicating what Sam Hill, a Quaker, felt so fervently: that it was imperative that future generations never lose sight of the loss of life, as well as the heroism and valor, which result from war" 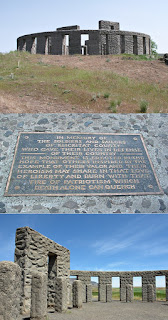 The HistoryLink.org website provides some interesting background on Sam Hill's inspiration for the memorial:

Sam Hill had visited Stonehenge on England's Salisbury Plain with Lord Horatio Herbert Kitchener (1850–1916) in 1915. Kitchener was Britain's Secretary of State for War at the time and it was supposedly he who told Sam Hill, "Here the ancients 4,000 years ago offered bloody sacrifices to their heathen gods of war" (Tuhy, p. 190). At the time it was generally thought that Druids had constructed Stonehenge as a place for human sacrifice. This idea has since fallen out of favor (some archaeologists believe Stonehenge functioned as an astronomical calendar), but it had a powerful impact on Hill at the time. A Quaker and lifelong pacifist, Hill reasoned that modern warfare (like Druid sacrifices as he understood them) was a form of needless human sacrifice. Hill's biographer John Tuhy quotes Hill as later saying that he built the Maryhill Stonehenge "to remind my fellow man of [that] incredible folly" (p. 190).

Hill asked Professor W. Wallace Campbell (1862–1938) of the Lick Observatory, who was in Goldendale to observe a total eclipse of the sun visible there on June 8, 1918, to decide where the altar stone should be positioned. The stone's placement and the plan for where the standing pillars would later be located were based on Campbell's calculations of where sunrise would be on the summer solstice.