A Mission for the Cavalry: Convoying Prisoners

Anyone who has seen a police horse approach a crowd knows how intimidating a large equine with an armed rider can be, even to an energized group of people. The rider also has a great view of anyone or anything at ground level, and foot-bound individuals are further paralyzed by the knowledge that flight is futile since you can't outrun a horse. During the war, when the armies still contained plentiful cavalry units, they were natural candidates for the job of marching large groups of prisoners off the battlefield. Also, after the deadlock occurred on the Western Front something was needed to keep the mounted forces active. In the several views below, the most interesting is the one in the lower right. Note the large ratio of German prisoners to the small number of mounted Moroccan Spahis. 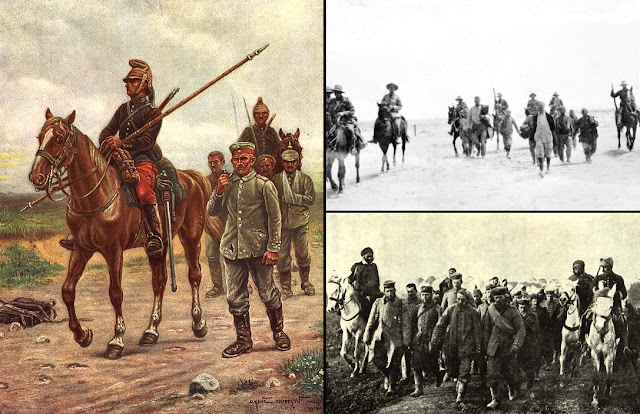