Greetings from the Ypres Salient

Today, I am in Wipers with my Flanders 1917 tour group.  One of the highlights of today's itinerary is a visit to Essex Farm, just north of Ypres.  It's one of the must-see sites in the Salient.  I'll ask one of the group to read "In Flanders Fields" at the site where McCrae was resting from a busy day at his Casualty Clearing Outpost and was inspired to write a poem.  I wonder if you know that there is a statue of McCrae in Ottawa? Here's some information on it. Personally, I think there ought to be a matching figure here at Essex Farm.

Lieutenant-Colonel John McCrae was the Canadian soldier, doctor, and poet who wrote "In Flanders Fields" during the First World War. Born in Guelph, Ontario, in 1872, he served with an artillery battery in the South African War and had a successful civilian medical career. When the First World War broke out in 1914, the patriotic 41-year-old enlisted again and would be appointed brigade-surgeon to the First Brigade of the Canadian Field Artillery.

During the 2nd Battle of Ypres in the spring of 1915, McCrae was tending to the wounded in a part of Belgium traditionally called Flanders. On 2 May, a close friend was killed in action and this painful loss inspired McCrae to write "In Flanders Fields" the next day. It would be published in Britain’s Punch magazine and quickly became one of the best-known poems of the war, helping make the Flanders poppy an international symbol of remembrance. Sadly, Lieutenant-Colonel McCrae would not survive the conflict, dying of illness in January 1918.

The Lieutenant-Colonel John McCrae Statue in Ottawa features a large likeness of McCrae in the uniform of an artillery officer, with his medical bag at his feet and poppies growing nearby amidst the destruction of a battlefield. Designed by Canadian artist Ruth Abernethy, it was erected by the Royal Regiment of Canadian Artillery in collaboration with the Royal Canadian Medical Service. This beautiful monument stands beside the National Artillery Memorial and was unveiled on 3 May 2015—the 100th anniversary of the writing of his renowned poem. 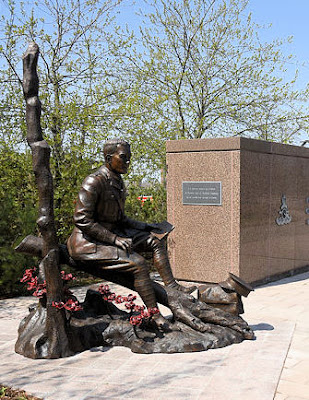 Some of the heaviest fighting of the First World War took place in the trenches near Ypres, Belgium. It was during the Second Battle of Ypres that the German Army first used deadly chlorine gas against Allied troops. Despite the debilitating effects of the gas, Canadian soldiers fought relentlessly and held the line. Lieutenant-Colonel John McCrae was inspired to write the poem In Flanders Fields after presiding over the burial of a friend during this battle.