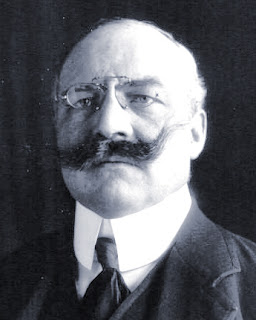 Radical socialist, Dreyfusard, and Saint Cyr graduate, Adolphe Messimy (1869–1935) made his mark in both the political and military spheres of France before and during the Great War. At the start of hostilities he held the position of minister for war for the second time in the administration of René Viviani. Despite his volatile personality, he had worked his way to the top as a professional politician after retiring from the army in 1899 over the Army's handling of the  Dreyfus Affair. Messimy, however, received some of the blame for the failure of Plan XVII, which he had defended against more defensive strategies, and resigned before the month of August 1914 had ended. His had been one of the authorizing signatures on France's mobilization order.

Before the war he had recommended a series of reforms that were controversial at the time but would prove prescient.  He had recommended larger artillery for French divisions, specifically 105mm pieces, but most French generals thought them defensive weapons and a hindrance to offensive operations. Most famously, he was an opponent of the rouge pantaloons. After visiting the Balkans and seeing the advantage held by Bulgarians in their inconspicuous uniforms, Messimy also proposed replacing the red kepi and pantaloon rouge (red trousers) worn by the French Army since 1830 by a grey-blue or grey-green uniform (the British Army had recently switched from scarlet to khaki and the Germans from blue to field-grey). This plan was blocked by French generals and politicians. Messimy later wrote of the “blind and imbecile attachment to the most visible of all colours.”

He rejoined the army as a reserve captain and proceeded to serve with distinction as an intelligence officer and in the Vosges sector where he was wounded. A colonel by 1916, he was again wounded at the Somme. His men liberated Colmar at war's end.  His rise in grade continued throughout the war and he ended his military career as a general and divisional commander. Afterward he returned to his political career with mixed success.