Seen in Flanders: New Things and an Old Favorite

I'm just back from my Flanders – 1917 battlefield tour and have begun sorting through the photos I've started gathering from our tour members.  Here are photos of some of the new things I've never seen before, others I've somehow managed to miss in my 27 years of visiting the Western Front, and one old favorite.

The Wellington Quarry in Arras 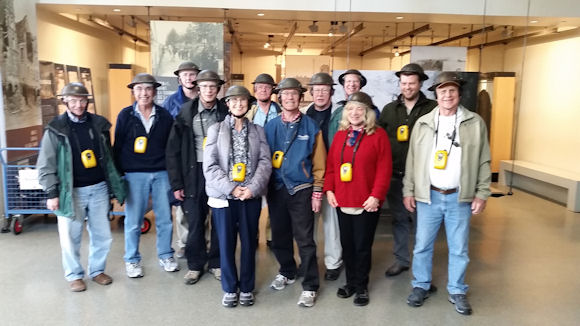 The hiding place for an incredible 24,000 soldiers the week before the 1917 Battle of Arras, the visit to the Wellington Quarry (one of four) was rated the top stop on our trip by some of our participants. Our group (shown above) was fitted out with authentic tin hats for the visit to the vast underground caverns, which retain much evidence of its habitation by British troops 100 years ago. 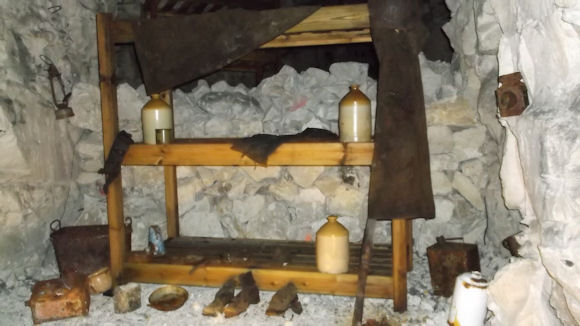 We made two striking discoveries at Langemark Cemetery in the Ypres Salient.  Above is shown the new location of the famous four-figure statue by Emil Krieger.  Formerly, when you entered the cemetery, what was apparently a party of eternal mourners seemed to greet you from the distant far side of the huge cemetery. The effect was quite arresting.  However, you did not realize that the work depicted four German soldiers attending the funeral of one of their mates.  They have been moved to the site shown, with their backs to the shelter at the cemetery's entrance.  The soldiers (their identity is clear when you are near them) are now standing over a mass grave of nearly 25,000 of their mates. 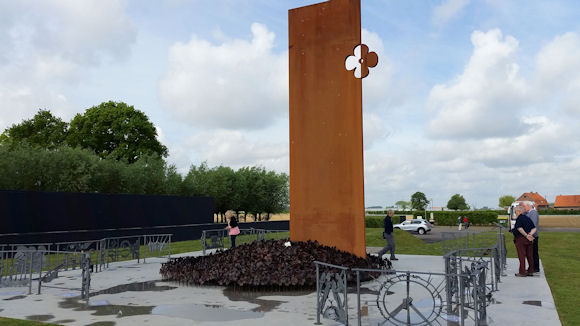 Discovery two, is titled the "Langemark Cenotaph".  Dedicated in 2016, the new memorial is enhanced by the winning entries in a worldwide competition amongst blacksmithing artists.  The individual pieces are both representational and somewhat abstract.  We will show more of these in future postings on Roads. 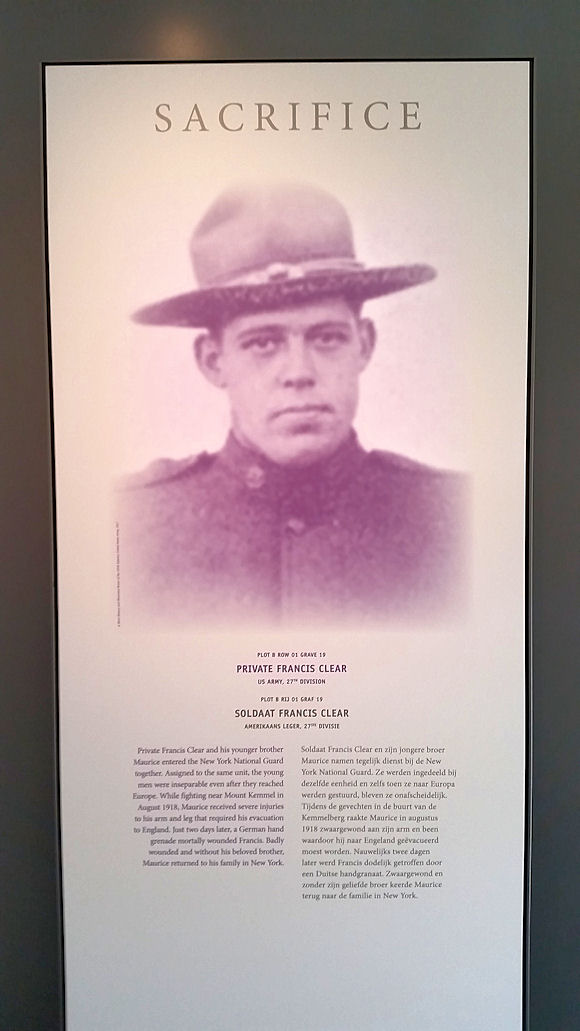 Another stop that will get a lot of attention in future postings is the small but superbly done Visitor's Centers at Flanders Fields Cemetery. Shown here is  the panel for a typical Doughboy killed in Flanders, Francis Clear of the New York 27th Division.  For me the highlight was the 10-minute orientation film that managed to capture the spirit of the American involvement in WWI better than the recent 6-hour PBS production. 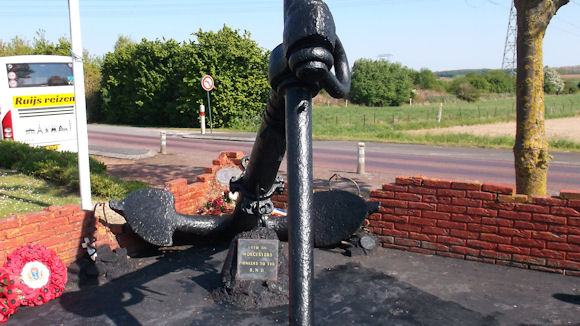 I thought this monument to the very active Royal Naval Division for their work at the Battle of Arras deserved an "A" for imagination.  It tells the story of the action by representing the division with an anchor caught in the ruins of a town.  After the tough fight to capture Gavrelle, the division had a tougher time breaking out of the town as the Germans surrounded it with traps and ambush spots. 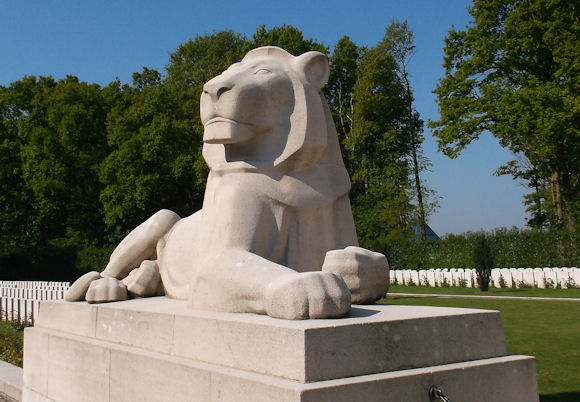 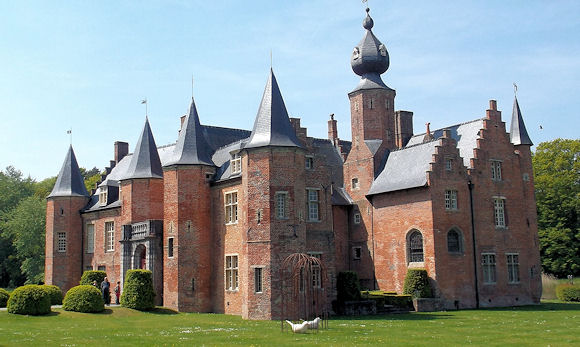 This was Richthofen's Quarters During Bloody April 1917 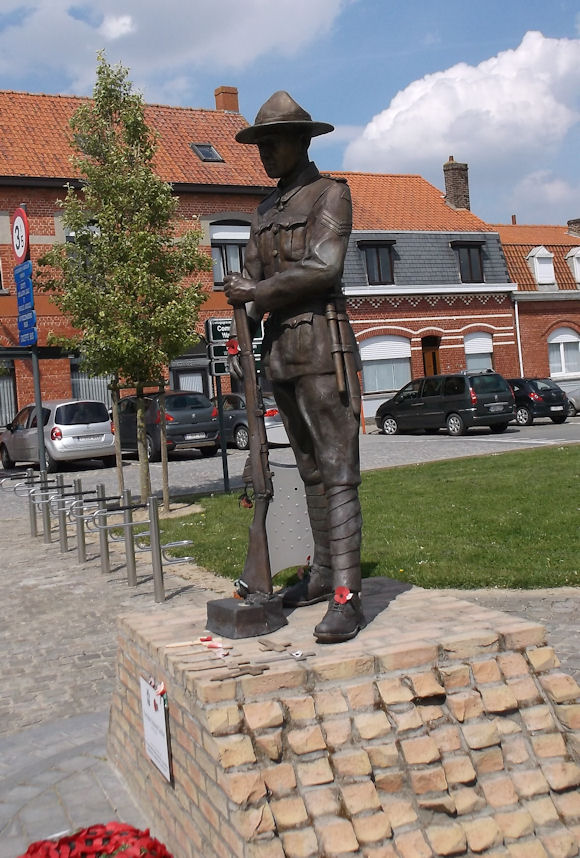 A Kiwi Soldier at Messines Town Square reminds visitors that it was the New Zealand Division that liberated the village on 7 June 1917.


At the Passchendaele Memorial Museum 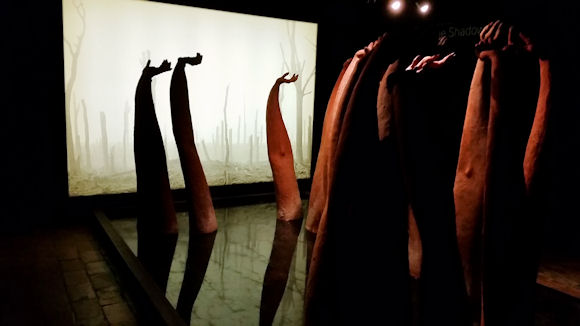 Although, I had seen photos of it, I had never seen the haunting "Falls the Shadow" by New Zealander Helen Pollock in person before.  Its impact is almost over-powering.  The artist's father served in Flanders during WWI.

Below is a tour guide's delight — a cross section of the Passchendaele battlefield.  It clearly conveys information that is most difficult to express verbally.  Which in my mind makes it great graphic art. 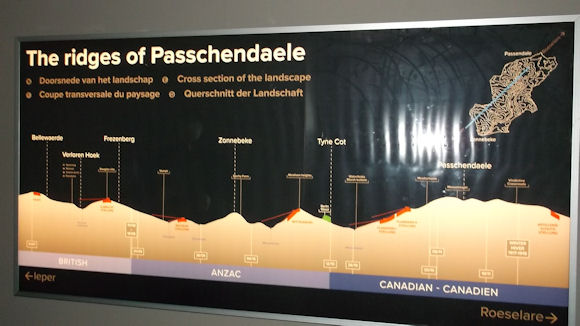 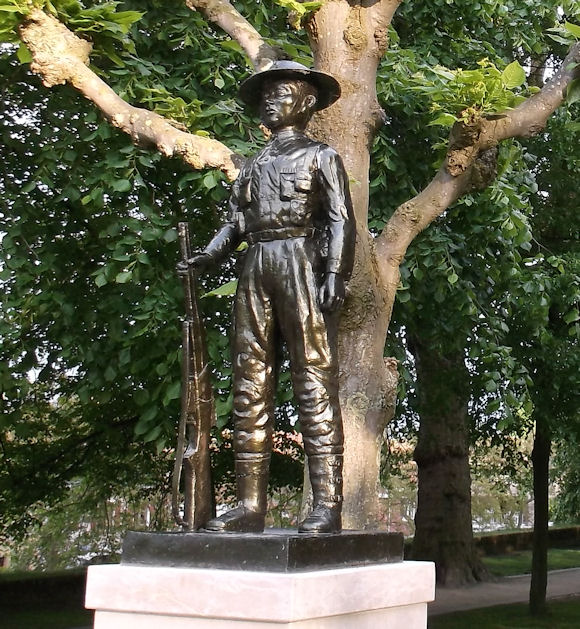 A recent addition where the Ramparts meet the Menin Gate. 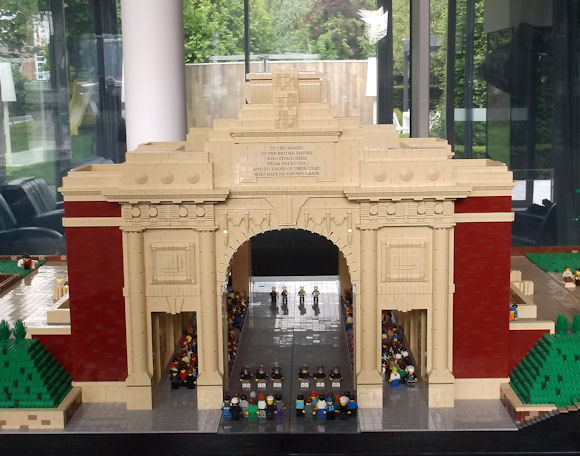 I thought Lego models were meant to be parodies and didn't know you could achieve such accuracy and show such serious intent. 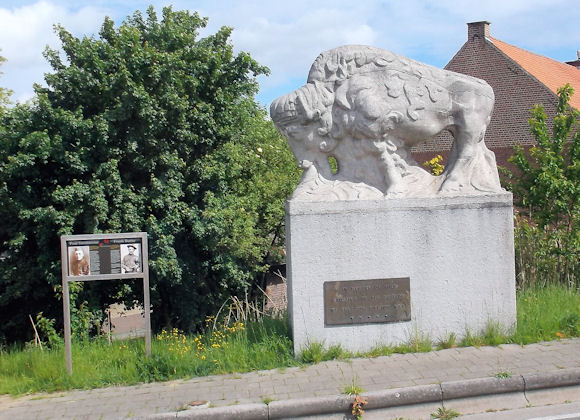 At the 2 November 1917 river crossing by the 37th Ohio National Guard Division, the Ohio Bridge is actually the third of the post WWI period, but the four American bison guarding the approaches are the originals.

Created by the  largest of the 19 mines blown on 7 June 1917, the St. Eloi Crater is now a pretty village picnic and fishing spot.