Plan XVII Failed Worse and Earlier Than the Schlieffen Plan


In 2014 I led this group on a battlefield tour of the sites of the opening actions of the Great War in the west. It was part of my Centennial Series of WWI Battlefield Tours. It included my first visit to the multiple battlefields of the Ardennes, where the fighting came to a head on 22 August 1914. On that day, inclusive of other fighting along the frontiers, the French Army suffered its greatest single day's loss of the war, and Joffre's Plan XVII was utterly shattered. The full scope of the French disaster that day hit me for the first time during this visit. Going from hot spot to hot spot, I began to see a pattern, a sameness, to almost all the French defeats. At a tactical level, the German Army was simply better in the conditions of that day, as both armies were advancing with aggressive intentions but with the movements and mass of the enemy forces not fully known. In most situations, the Kaiser's forces exhibited better reconnaissance, more agility in adapting to local terrain in the variety of surprise encounters, and a vastly superior ability to deploy and focus their artillery.

Even if the French operational skills were equal to their enemy's that day, however, I saw that there was an even greater handicap for the French forces in the Ardennes. They were saddled with a fatally flawed deployment plan. The maps and charts below should help to demonstrate this. 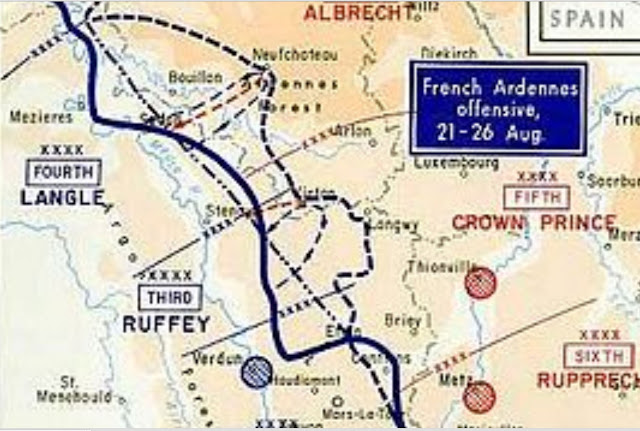 Above is the Ardennes section of a larger map that shows the Battles of the Frontiers. The Ardennes was just one of the areas of fighting on these days. The struggle in the Ardennes was the largest and most critical of these battles, involving concurrent offensives by two full armies from each belligerent, roughly facing off against one another along a 50-mile front. This map however, though geographically accurate, is misleading in a dynamic sense. 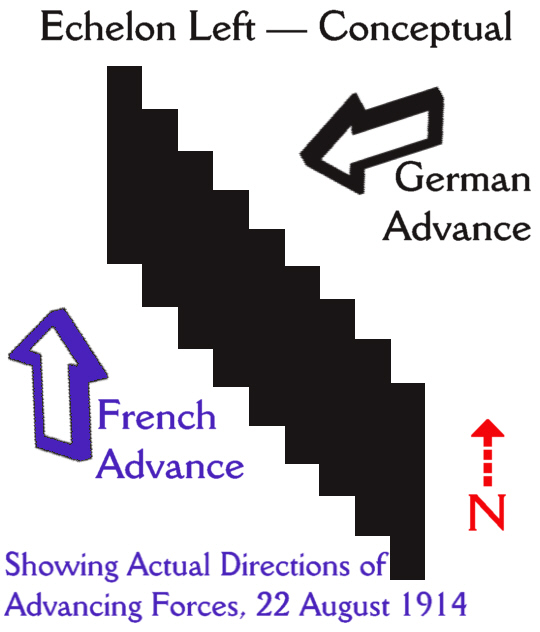 This schematic shows the actual directions of both offensives that day with the black bars indicating the relative positions of the nine corps of the two French armies attacking that day. They were arrayed in a formation known as "Echelon Left." In some fit of geometric obsessiveness, the divisions within each corps were similarly staggered, and within each division, the brigades were also offset with the units to right about a half-day's march behind the unit on its left.

Closing one's eyes for a moment to the German movements that day, one can still imagine some problems in the offing. Advancing with an open right flank through unfamiliar country is chancy at best. Then, what happens when the unit in advance runs into a substantial enemy unit straight ahead? Does the French commander maneuver by himself, or call for help from the unit to his left — which may be having its own problems or be successfully advancing and moving ahead, beyond summoning range—or wait that half-day until he gets support on the right? By the way, about those forces on the right — suppose they, too, are blocked and fighting for their lives. They are never going to arrive in time to support the chaps on their left.

All these issues could be serious problems with the echelon left scheme, if the opposing forces were approaching each other straight on. But on 22 August 1914 the great encircling movement of the Schlieffen Plan was being executed and the German forces were pivoting and coming from the very worst direction for the French—directly toward those open right flanks. Many French units suffered from some of the flaws in this deployment plan that day. But on the roads around Bertrix and Ochamps, Belgium, the 33rd Division of Infantry (DI) of XVII Army Corps (CA) experienced all of them. Their defeat provides a case study, I believe, on why the French failure this day was total and probably inevitable given the tactical competence of their opposition. 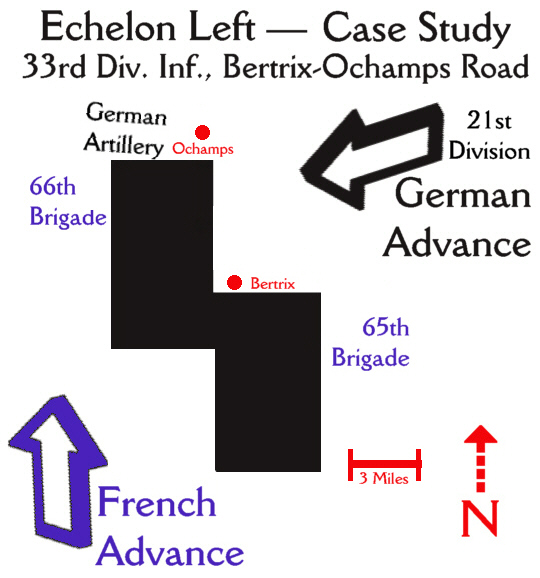 The first failure that day was due to the lack of reconnaissance. French cavalry, controlled by the corps, failed to notice both that several batteries of enemy artillery had been deployed ahead in the village of Ochamps and that a German division was heading their way from the northeast. As the 66th Brigade of the the 33rd DI was advancing on Ochamps from the south, the divisional artillery, protected by a regiment of infantry, was traveling down the main road into Ochamps in a forested area when the German batteries in the village opened fire. The French 75s were unable to advance, deploy in the woods, or return fire.

Subsequently, just after the brigade's infantry had failed in a first attempt to take Ochamps from the flank, disaster struck. The previously undetected German 21st Division arrived on the scene. Its officers quickly saw that a ridge running roughly north to south from Ochamps to Bertrix with a second road along its crest dominated the French position. They quickly deployed artillery and machine guns along its length. Though the Germans themselves, being exposed on the ridge, suffered heavy losses, their fire annihilated almost all the French artillery and much of the infantry. Furthermore, as the 33rd DI's other brigade finally began to arrive at Bertrix, the German forces simply turned their guns and began similarly devastating fire on the new arrivals. It was a total defeat for the 33rd DI. Its parent command, the XVII CA—with its second division, the 34th DI, now in peril—soon ordered retreat. The hasty withdrawal left a huge gap in the French position, which, fortunately for them, the Germans were not able to fully exploit.

This is a photo of the open right flank of 33rd DI. Ahead on this road is Ochamps. The German artillery in the village halted any further advance down the road, trapping all the French artillery in its forested section, which is just behind our photographer. Subsequently, the German 21st Division deployed along the ridge line visible in the distance. From there it was able to inflict devastating fire on the 66th Brigade, and later to do the same to the division's sister brigade coming up from the south.

After my visit to the Ardennes and reading what I could find about the fighting there. I have concluded that action on the Bertrix-Ochamps road was a microcosm of the whole French disaster in the Ardennes. All the vulnerabilities of the echelon-left deployment were exposed here, and the pattern of superior reconnaissance, greater tactical agility, and effective use of artillery by the Germans played a factor as well. No wonder it was a greater disaster than the first day on the Somme.

For France, there was a single silver lining in the catastrophe.  Joffre had learned over a week earlier than his opponent, Helmuth von Moltke, that he had gone to war with a near-fatally flawed plan. While the German Army was pushing ahead in late August 1914 Joffre could conceive a new strategy and get ready while his forces were retreating to the Marne.