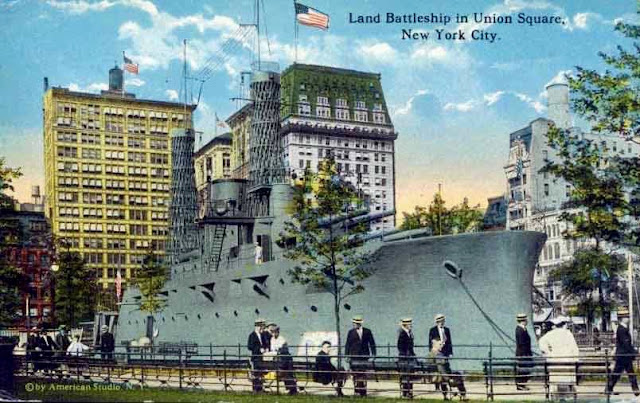 
At half past noon on 30 May 1917 New York City mayor John Purroy Mitchel arrived at Union Square for a public gathering. It was one of several Decoration Day events taking place around the city. Uptown, Governor Charles S. Whitman and Major General J. Franklin Bell, commander of the Department of the East on Governors Island, were presiding over the annual parade past the Soldiers’ and Sailors’ Monument in Riverside Park. Fifty-two years after Robert E. Lee surrendered to Ulysses S. Grant at Appomattox, there were still several hundred aged Boys in Blue in the procession. This year’s event had special resonance—the United States had entered the Great War earlier the previous month and tension was high. Mayor Mitchel was in Union Square to launch the USS Recruit, a scaled-down, wooden replica of a U.S. battleship built, as its names suggests, to spur enlistment in the American armed forces. The Recruit remained in Union Square for almost three years and proved a big success. Nearly 25,000 men joined the Navy there. The Navy generously shared the facility with the Army and Marine Corps. The public could purchase Liberty Bonds at the site. There was fun to be had too. Sports and entertainment were a regular features aboard the USS Recruit.

Mayor Mitchel had called for the construction of the Recruit just over a month earlier, on 27 April. Everyone understood the importance of expanding the Navy. Germany and Great Britain had spent much of the past two decades building their naval forces. Playing catch-up, President Theodore Roosevelt had sent the Great White Fleet on an a 14-month around-the-world journey in December 1907. Still, the U.S. Navy was a fraction of the Europeans’. The Navy Department in Washington had established New York City’s quota at 2000 sailors, a number that Mitchel was determined to meet. The task of building the Recruit fell to the Mayor’s Committee on National Defense, who hired the George A. Fuller Company, whose work included the Flatiron Building just north of Union Square, to construct the 200’ x 40’ ship modeled to resemble the USS Maine. Construction expenses were $10,000, just under $200,000 in today’s dollars, and the funds were raised through private subscription.

Civic and military dignitaries watched the mayor’s wife, Olive Child Mitchel, christen the Recruit with a bottle of champagne, after which her husband turned the ship over to the Navy. The city’s flag came down and the pennant representing Admiral Nathaniel Riley Usher rose in its place. Navy and Marine officers wasted no time getting down to business. The Recruit was outfitted with office space, medical facilities for physicals, electricity, running water, and even living quarters for physicians. It was aboard the USS Recruit in June 1917 that Lieutenant John Philip Sousa made his first public appearance after enlisting in the Navy days earlier; the 63-year-old composer was leading his Marine Band again for the first time since leaving the Corps in 1892. The following month there was a vaudeville show with Broadway stars, followed a week later by an appearance by soprano Mabel Garrison of the Metropolitan Opera. Irish heavyweight Jim Coffey oversaw a boxing tournament in May 1918. Adding to the international flavor, a contingent of ANZACS from Australia attended the pugilistic matches to get to know their new allies and build camaraderie.

Of course none of this got in the way of serious business. The recruiting, charity, and bond drives continued. On 10 March 1918 Governor Whitman’s wife set forth three carrier pigeons to First Lady Edith Wilson back in Washington in a publicity move for a Women’s Overseas Hospitals U.S.A fundraiser. Secretary of the Navy Josephus Daniels came aboard the following week, just as the spring fighting season was about to commence in France. The National League for Woman’s Service sent its Camouflage Corps in July 1918 to paint the ship various shades of white, black, green, blue, and pink. This camouflage demonstration aligned neatly with the Recruit’s mission to instruct New Yorkers on what the Navy did and how it operated. To this end there were “wash days” and demonstrations of machine gun and artillery maneuvers, all while the recruiting was going on. Union Square had long been a meeting place for radicals and agitators. Ironically while sailors, solders, and Marines were working aboard the Recruit, socialists, anarchists, and suffragists were pamphleteering against the war in the same park.

The Armistice came in November 1918, but the Recruit continued its work for another 16 months with its usual mix of work and public diplomacy. A troupe performed Gilbert & Sullivan’s comic opera “H.M.S. Pinafore” in summer 1919. On 10 September the Navy flew a “free balloon” over New York City for the first time, the craft leaving the Rockaway Naval Air Station and settling over Union Square while dropping recruiting leaflets along the way. In early 1920 officials decided to decommission the Recruit. The idea was to send the ship to Luna Park, the amusement center in Coney Island. For reasons that are still unclear that did not come to pass. Presumably Luna officials decided that visitors did not want to be reminded of the war while relaxing at the amusement park. Americans in 1920 wanted nothing more than a return to normalcy. The ship’s fate came rather anticlimactically, and sadly little or nothing remains of the USS Recruit today. On 16 March 1920, 80 sailors stood at attention while the Recruit band played its last rendition of "The Star-Spangled Banner." The American flag and commanding officer’s standard came down from the masthead for the final time, and construction workers quickly began disassembling the vessel.


Keith Muchowski is a librarian and professor at New York City College of Technology (CUNY) in Brooklyn, New York. He blogs at thestrawfoot.com