First to Fight: The U.S. Marines in World War I
Reviewed by Peter L. Belmonte

First to Fight:
The U.S. Marines in World War I 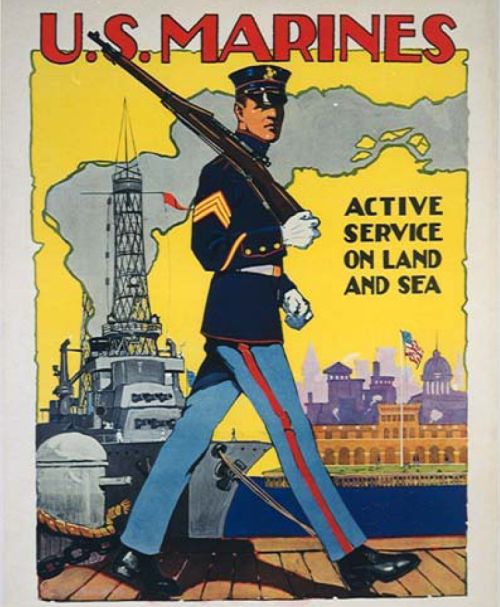 An elite fighting force, the U.S. Marine Corps has always received attention from historians and enthusiasts. First to Fight by Oscar E. Gilbert and Romain Cansiere adds to a respectable corpus of works on the Marines in World War I. What makes this book different than, say, studies of Belleau Wood or the Meuse-Argonne, is its scope. The authors here present a fairly complete overview of the Marines during the war. Gilbert, a former Marine Corps artilleryman who later taught at universities and worked for the U.S. government, has written several books on the Marines. He had previously teamed with Cansiere, a student of Marine Corps history, to write about Marine Corps tanks on Tarawa. The authors, therefore, are presumably well versed on this subject.

Initial chapters cover recruitment, training, and deployment overseas. Just like the other branches of the U.S. military in 1917, the Marine Corps was unprepared for a modern war. In April 1917 the Corps consisted of 13,214 enlisted men, 79 warrant officers, and 462 commissioned officers. A successful recruiting drive and training regimen resulted in growing the Corps to about 70,000 enlisted men and almost 2,500 officers in November 1918.

Each of the Marines' major combat actions is covered chapter by chapter: Belleau Wood, Soissons, St. Mihiel, Blanc Mont, Meuse-Argonne, and the occupation of Germany. Interspersed are chapters dealing with replacements, medical care, aviation, women Marines, and fleet Marines. Using published and unpublished sources, the authors present these topics buttressed by the words of participants. Many of the "voices" will be familiar to World War I students: Generals John Lejeune and James Harbord, Clifton Cates, and Frederick Wise. Others, common soldiers and junior officers, might be new to readers: Walter Gaspar, Ford Rogers, and Martha Wilchinski, to name just a few. The major battles are covered "day-to-day" through the eyes of the officers and men who fought. In this way, one gets an overall impression of the action.

Belleau Wood, Soissons, and Blanc Mont receive a fair amount of coverage, but the other battles are dealt with much more briefly. During the war, the Marines had a presence in such places as "Cuba, Hawaii, the Philippines, Puerto Rico and the U.S. Virgin Islands (the latter two for protection of the strategic Panama Canal)" (p. 199), but these are barely touched upon in the book. Of course, given the nature of First to Fight, an overview, the authors had to be selective in their coverage.


An appendix covers weapons and equipment, and 39 photographs and several maps (mostly reprints from the fine American Battle Monuments Commission series) enhance the text. The authors' end notes are helpful for those wishing to pursue their studies further. The four-page bibliography includes mostly published sources but also 21 interviews from the US Marine Corps History Division. There is no index, and this makes it difficult to track individuals who have been quoted throughout the text. While there is probably nothing new here for the ardent Marine Corps aficionado, the book will appeal to people just beginning their studies. It is recommend as a fine, one-volume introduction to the U.S. Marine Corps in World War I.