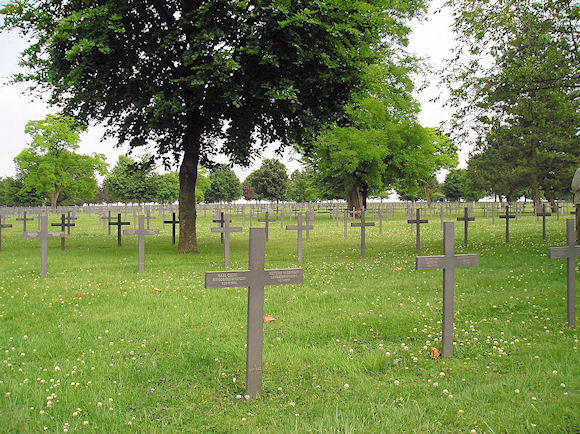 The German war graves commission, the Volksbund Deutsche Kriegsgräberfürsorge (VDK), was finally allowed to intervene in German military cemeteries in France in 1926. Starting in 1919, the French War Graves Department demolished a large number of small cemeteries close to the front and concentrated the graves in larger cemeteries. At that time, these military graveyards were simple unfenced fields with wooden crosses, however, in areas of the front where the death rate had been particularly high.  The VDK decided to establish new cemeteries and one of these, shown above, was at Neuville-Saint-Vaast, the largest of them all with 36,000 graves [today with over 44,000]
.

The Treaty of Versailles provided for German cemeteries to be placed under the guardianship of the French authorities (a state of affairs which lasted until 1966), which meant they had control over all the developments or permanent buildings undertaken by the VDK. The French authorities refused to return the bodies to their families. The German cemeteries were designed in the interwar years by architect Robert Tischler, a veteran of the Great War. He based his designs on two major principles: mourning and universal life. Due to the cramped nature of the concessions allocated by France, burials were carried out in large communal graves called "Comrades' Graves". Tischler took care to make the German cemeteries blend in with their environment, in particular fitting in with relief, as is clearly visible at Neuville-Saint-Vaast. Plants grow freely and trees are not pollarded. His choices were influenced by German mythology's concept of communion between Man and Nature. The architecture of these cemeteries is austere but leaves a lot of room for trees to "watch over the eternal rest of the soldiers."

The cemeteries often give the impression of being in a forest. They feature stone walls and wrought iron gates and, in many cases, large stone crosses. Communal graves are marked by engraved slabs often combined with rough stone crosses. In the 1920s the VDK used wooden crosses with a zinc plate, and sometimes stone slabs laid on the ground, to mark individual graves. In the 1950s the decision was taken to generalize the use of erect crosses to give a better visual portrayal of the extent of the slaughter, and for these to be made from durable materials (aluminum, cast iron, or stone). Each cross or headstone bears the surname, first name, rank, date of birth, and date of death of the soldier concerned.

It has often been suggested that it was the Treaty of Versailles which obliged the Germans to choose dark-colored crosses for their military cemeteries; however, if this was the case the rule was not strictly applied because in many cases white crosses were used. A more practical analysis suggests that the dark color of many of the crosses in German military cemeteries corresponds to the need to protect the original wooden crosses with tar-based paints.

Many of the crosses which can be seen today, made from stone or steel, were installed in the 1950s and 1960s.  As soon as Hitler rose to power the VDK was placed under official supervision. Remembrance of the Great War was a significant political issue for the new regime It shifted emphasis on to the heroism of the soldiers and any aspect of reconciliation was removed. Furthermore the architect Tischler made no attempt to hide his strong sympathy for the Nazi regime. During the Second World War the VDK was placed at the disposal of the Oberkommando der Wehrmacht and in 1941 placed, albeit implicitly, under the guardianship of the Hitlerjugend (Hitler Youth). 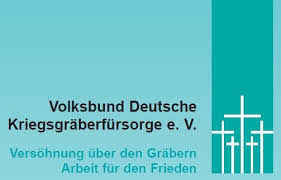 The VDK was quickly reorganized after the chaos of 1945, and, in spite of his pro-Nazi stance, Tischler returned to his post. The German cemeteries which can be visited today are the fruit of structural work carried out in the 1920s, but the main "funerary objects"—the crosses—were for the most part designed after the Second World War. At the entrance to the largest graveyards stands a "memorial hall" which is in some cases decorated with sculptures or mosaics. In 1966 the emergence of the Europe Community and initiatives for Franco-German reconciliation led to an agreement between the two countries to suppress the application of Article 225 of the Treaty of Versailles, and this placed the upkeep of German military cemeteries under the sole responsibility of the VDK.