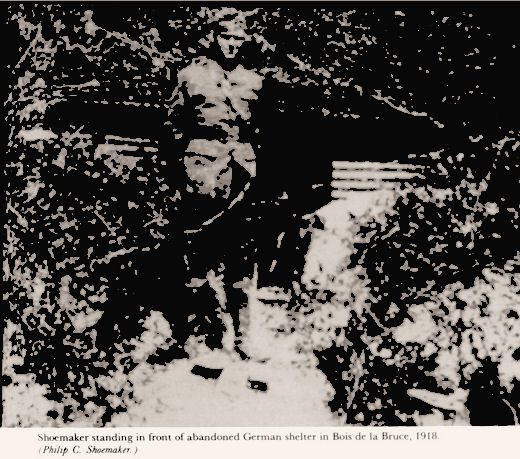 Philip C. Shoemaker was born in Bellefonte, Pennsylvania, on 23 January 1896. In the spring of 1916, after studying agriculture at Pennsylvania State College for two-and-a-half years, he joined the Boal Machine Gun Troop, a militia unit privately raised and funded by Theodore D. Boal, a wealthy landowner from Boalsburg. Redesignated as Machine Gun Troop, First Pennsylvania Cavalry, the troop was mustered into federal service and sent to the Mexican border to join the Pennsylvania National Guard at Camp Stewart, Texas. In January 1917, the troop returned to Pennsylvania and was mustered out of federal service. It continued to train, however, and again was mustered into federal service in July 1917, when President Woodrow Wilson, war having been declared against Germany the previous April, called up the National Guard. Training at Camp Hancock followed, where Shoemaker's troop became Company A, 107th Machine Gun Battalion. Shoemaker, who had served as stable sergeant during the 1916 mobilization, was appointed a second lieutenant in the National Guard on 5 August 1917 and eight months later was promoted to first lieutenant.

He served with the division in the Second Battle of the Marne and the Meuse-Argonne Offensive in which he was wounded.  In this letter, he describes in detail how he was wounded in October 1918 to his mother.


Following is the complete history of me from the time I was wounded up until [I entered the hospital]....Was riding in a Ford truck not far from the front line, and in all probability within view of the Boche artillery, and I know for a certainty within range for two or more shells dropped right alongside of us getting me in five different places. Can not express the feeling of being shot, except to say it is a very peculiar and anything but a pleasant one. I did not know I was hit until I saw the lots of blood. The car was stopped quickly I jumped off, fell, then managed to get behind some dirt and stones pulled up about 6 feet high. Behind this barrier I made myself as small as possible and prayed faster and harder than I ever prayed before; the shells kept coming over by the dozens and there was no time lost between the dozens. I kept on praying, each prayer was said faster than the preceding one. After a 1/2 hour of hard shelling and praying the Boche and I let up. Fortunately I found a first aid station not very far away. Here I was tagged and given first aid.  The two men-[George I.] Smithers and [George W.] Lauck who were with me were also fixed up here. Smithers got in the head-was the least serious. Lauck was wounded in the shoulder and chest not serious.

From here we were taken to a field hospital in the Ford, where we got the tetanus shot then we were loaded on an ambulance and sent to another field hospital where I was put in a church, the main idea to wait until they got an ambulance full. Here a Red Cross lieutenant took a liking to me and helped me out. I must of been there several hours, finally I was put on a stretcher, covered up and loaded on an ambulance, my stretcher was the top one. Over the worst road in the world went our ambulance, when the ambulance went up hill I slid down, when it went down hill, I slid up, most of my sliding was down to make matters worse the stretcher closed with me, making me just a bit more uncomfortable.  After the worst ride of my life we reached Evacuation Hospital No. 1. Here I was unloaded, and carried into the receiving ward, I was quickly undressed most of my clothes were cut off and my history taken....


After the war Shoemaker briefly worked in several jobs and then returned to the Boalsburg area to farm and operate a general store. "Now at last," as he wrote this editor, "I could grow many different kinds of vegetation, breed, watch and develop many different species of animals such as cows, horses, sheep, pigs, chickens and ducks. What I wanted most to do!" He passed away in 1991.

From "A Keystoner in the Great War the World War I Letters of Philip C. Shoemaker," Edited by John Kennedy Ohl, Pennsylvania History