Historian Jim Leeke on Baseball and the Great War 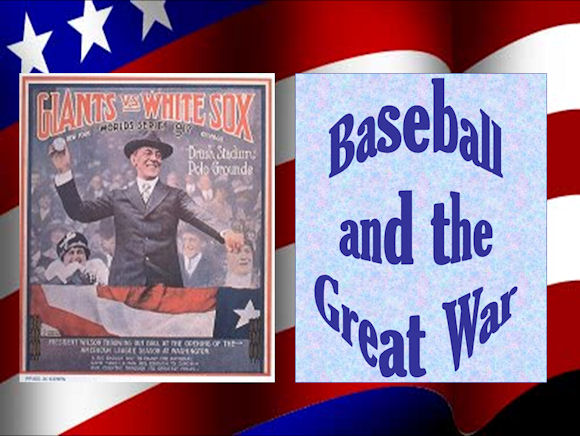 In the WW1 Centennial Commission's News Podcast, Episode 93 (12 October), host Theo Mayer spoke with Jim Leeke, author of the book From the Dugouts to the Trenches: Baseball in the Great War. In the interview, he answers a series of questions about the relationship between the major leagues, the players, and the war that changed the world. The following is a transcript:

Theo Mayer: In our historians corner, join us for a deep dive into one of the most American of pastimes, baseball. It's World Series season, and joining us to tell us more about baseball during World War I is Jim Leeke. Author of the book, From the Dugouts to the Trenches: Baseball during the Great War. Jim, welcome.
Jim Leeke: Thanks for having me.

Theo Mayer: So, Jim, when you look at the newspaper Stars and Stripes from 1918, or anywhere in that era, every single issue talks about baseball. How popular was the sport in the 1910s and what's different about the game then than it is today?
Jim Leeke: Well, back then it really was the national pastime. When America entered the war in 1917, they were the two major leagues of course, and there were 22 minor leagues. So it was a very healthy game. 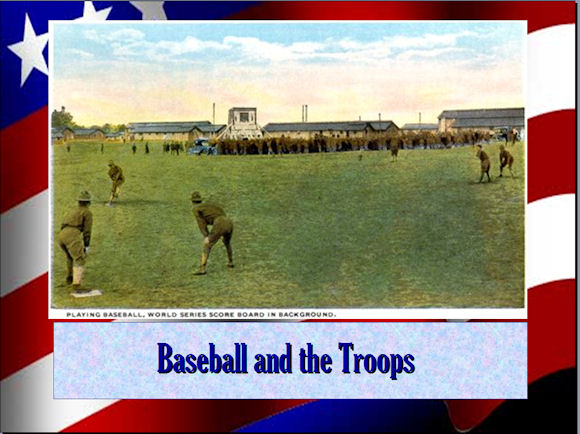 Theo Mayer: For the second round 1918 military draft, unlike the film actors, baseball players were dropped from the draft exemption list and that caused the World Series to be played really early in September. Can you tell us about that Series?
Jim Leeke: The regular season ended on Labor Day and the World Series started right after that. It was the very famous 1918, Chicago Cubs/Boston Red Sox series. The big thing that came out of that series occurred in game one, which was September 5th, in Chicago. That was at Comiskey Park. The star of the day, if not the game was a young third baseman for the Sox named Fred Thomas, who actually was in the navy and was on leave from the Great Lakes to play in the game.

At the 7th inning stretch, a military band struck up "The Star-Spangled Banner," which was not yet the national anthem, but it was a very famous and popular song nonetheless. The other players on the field turned to the flag and took off their caps, and put their hands over their hearts. Fred Thomas being in the service, snapped off a very correct military salute and this was noticed in the stands, and the fans began singing "The Star-Spangled Banner." It got louder and louder until it was this overwhelming and almost chilling rendition, and that really was the start of "The Star-Spangled Banner" being played at American baseball games. Not every game yet, but from then on, it was played at each World Series game and opening day. Then starting in World War II, it was played for every game. 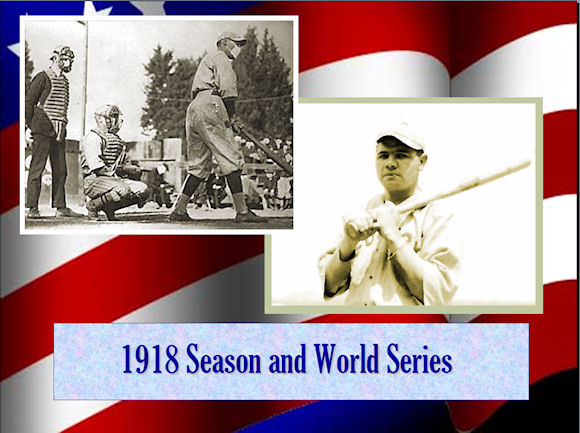 The other aspect of the 1918 world series was the threat of a player strike. That was a very controversial thing. Their share of the World Series revenue had been cut really without their input, and they weren't happy. On the train from Chicago to Boston, the players got together and decided not to take the field until they got a better deal. They actually had an argument, but it wasn't an argument they could make in that time at that place. The fans were in the stands waiting, among the fans were a number of wounded American troops. The players were in a no-win position, and eventually cooler heads prevailed and they took the field, but they just got pummeled in the press. The players got pummeled, the owners got pummeled, the leagues got pummeled, and nobody came out of it well, which is almost entirely forgotten today. Nowadays, the 1918 World Series is remembered fondly, because the Red Sox won it and didn't win it again for 86 years. At the time, it was very controversial and tainted in a way.

Theo Mayer: Well now regardless of the draft, a lot of baseball players volunteered, right?
Jim Leeke: A number of players did volunteer. More often, they waited for the draft notice but there were quite a few who volunteered. The first active player to do that was Hank Gowdy. He was the catcher for the old Boston Braves and the world series hero for the 1914 "Miracle Braves." Hank signed up in June 1917 and reported for duty the following month and ended up as a color sergeant in the 42nd Division, the famous Rainbow Division, and he was in combat in France for quite a while. There were a number of former major leaguers who signed up as well, and a large percentage of those seem to end up in officer's training. Many of them went overseas as well. My favorite was a pitcher named Edward Doc Laffite, who had played for the Tigers and the Brooklyn Tip-Tops in the Federal League, and was a dentist. He served in a plastic surgery unit in the army in France and England. He helped repair soldiers' ruined faces, a very admirable and worthwhile endeavor.

Theo Mayer: That leads us to about 100 years ago this week, when Captain Eddie Grant was killed in action. Can you tell us about him and how America reacted to his death? 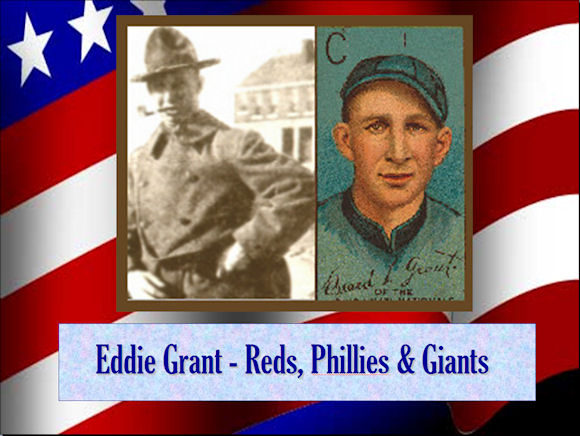 Jim Leeke: Yes. Captain Eddie Grant, called Harvard Eddie when he played. He played ten years in the big leagues. In fact, he was Harvard educated, he was a New York lawyer after he retired and he was one of the former players who signed up very early. He was in officer training by May 1917. He went to France with the 77th division, and I know you've dealt with this in previous podcasts. Harvard Eddie was killed in the Argonne forest attempting to rescue the Lost Battalion, which was commanded by a friend of his, Major Whittlesey. The newspapers called Eddy Grant baseball's first gold star, which wasn't accurate. He wasn't the first former major leaguer who died during the war, but he was certainly the biggest name. His death hit the headlines in probably every sports section in the country, and off the sports pages as well. An acquaintance of mine, the umpire Perry Lee Barber, not long ago tweeted out, "Eddie Grant lives." I'd use that myself, #EddyGrantLives, because I think it's true. You saw the fairly widespread publicity [earlier this month] on the centennial of his death. So it was one of the great, sad stories of World War I.

Theo Mayer: Jim Leeke is a World War I era baseball expert and author of the book, From the Dugouts to the Trenches: Baseball During the Great War. Learn more from the links in the podcast notes, which include Jim's World War I baseball WEBSITE.