France and the Battle of the Somme

There are two surprising dimensions to the French involvement with the of the Battle of the Somme. The first of these is that it was France that decided that the battle was to be fought and where it would be fought. These little understood details were described by French historian Roy Prete in a 2009 Journal of Military History article, "Joffre and the Origins of the Somme: A Study in Allied Military Planning."

A closer look at the initial planning of the Battle of the Somme, with evidence gleaned from in-depth archival research in French and British archives, reveals that the Battle of the Somme was the culmination of a long series of measures, ploys, and discussions, by which the French had attempted to draw the British more fully into the war effort in France. . . .On the operational level, the key question for the French staff was not only how to best deploy available Anglo-French forces, but also how to obtain a maximum contribution from their British allies. Traditional stereotyping held sway. In French eyes, any decisive offensive would have to be conducted mainly by French troops with their superior élan. Based on their perception of the “bulldog” nature of the British character, the French view of British forces was that the British were better suited for defensive than offensive warfare. A major French concern, therefore, from the beginning of the war, had been to lead the British into battle. The dominant French perception of the British as “slow, late and unaggressive” meant that to mount a really good offensive, one had to locate the French and British forces side by side. General Ferdinand Foch, who had been sent to coordinate the activities of the Allied armies—French, British, and Belgian—in the North of France in October 1914, had used this as a method of holding the Allies in the line; hence, French forces encased Belgian forces and British and French forces alternated in the northern theater in the first Battle of Yprès. Perception of the British thus came to the fore as the French staff began to consider a new offensive for 1916. Experience has shown, said a French staff memo on 7 October 1915, in a general review of the Allied situation, “that because of their limited offensive capacity, British forces are unable to engage in really powerful action except in close liaison with French troops.” 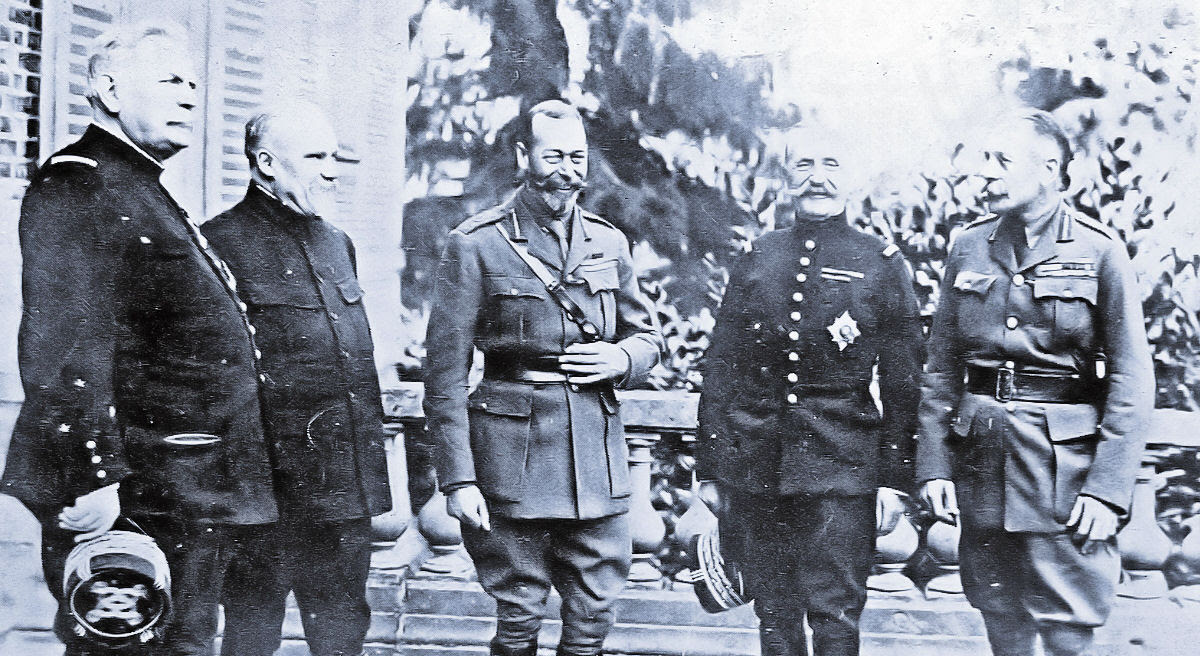 16 August 1916 Meeting of Principal Military Commanders at the Somme with President Poincaré and King George V
Joffre on Left, Foch and Haig on Right

The French staff chose the British site for the battle north of the Somme contrary to the advice of Foch. In response to Joffre’s request to Army Group Commanders on 27 October for advice as to a potential location for a new offensive at least on the scale of that at Champagne, Foch argued on 10 November and subsequently, that breakthrough against fortified trenches and in-depth defenses was unlikely. Rather, he advocated a series of “bite and hold”operations aimed at destabilizing the enemy’s defensive system by carefully planned, systematic, and successive artillery attacks, with reduced loss of troops in seizing and holding the terrain. In his view the wooded and hilly country north of the Somme as far north as Bapaume was unsuited to such actions, while the plains south of the Somme as far as Lassigny were deemed more satisfactory. Joffre having chosen the Somme-Lassigny front on 15 December, Foch presented a detailed plan on 2 February 1916 for a major French offensive on that front, but independent of any coordination with the neighboring British armies, "whose tasks are not decided."

The French staff meanwhile began to think in terms of a simultaneous British battle in a nearby area north of the Somme, between Arras and the Somme, which they presented to the British on 25 December. And ultimately Joffre and his staff decided, on 14 February, despite the less-favorable terrain immediately north of the Somme, in favor of a joint offensive astride the Somme to bring British and French forces into yet closer liaison. The joint offensive, argued the French staff, in addition to drawing in the British, would also have the advantage of eliminating two flanks, improving the prospects of a decisive breakthrough. The French would thus be in position to lead the British into battle in the side-by-side offensive, despite the less-than-favorable terrain north of the river. 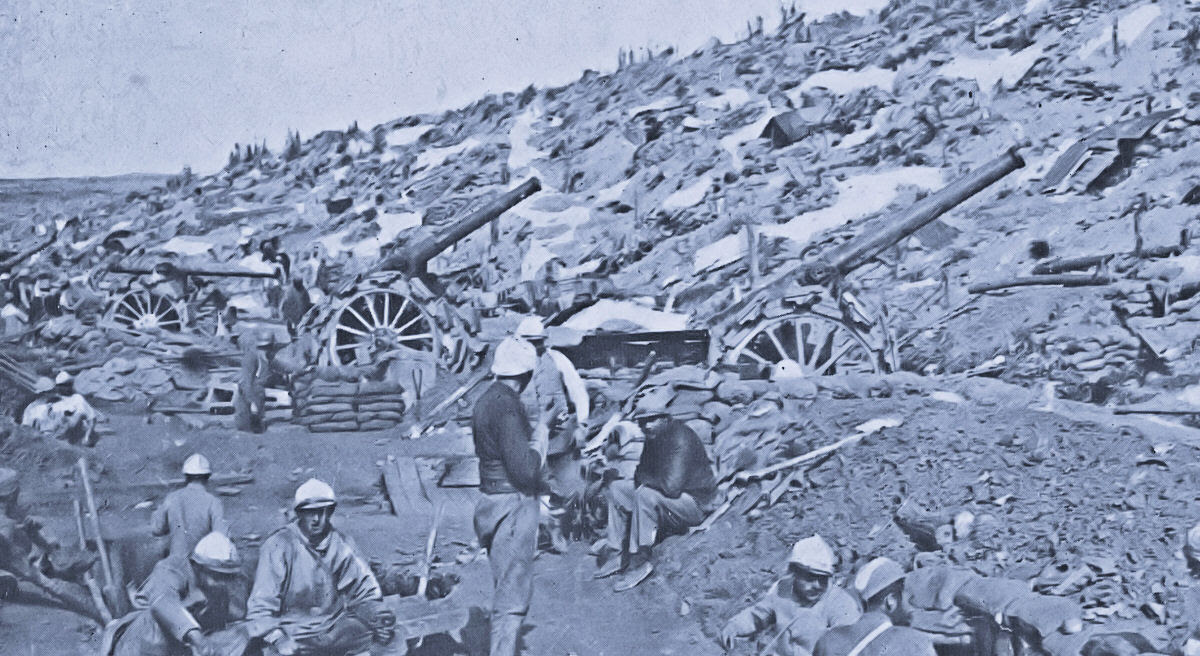 French Artillery Battery at the Somme

A second aspect—usually under appreciated in English-language accounts—is the importance of French contribution to the fighting. Despite the draining effect of Verdun, supreme commander Marshal Joffre gave the joint offensive all the support he could muster. To start, he insisted regional commander General Foch deploy three corps of his Sixth Army on either side of the Somme River. On 1 July they would attack on both sides of the river, which runs east-west between its jump-off line and their objective, the town of Péronne.

On that first day, the French divisions, with overwhelming artillery support in its sector, achieved all of their objectives north of the river and were only constrained by the lack of British progress on their northern flank. South of the river, they even exceeded some goals, capturing over 4,000 prisoners.

Afterward, considerable tension developed between Joffre and the British and Joffre and Foch. Joffre wanted to maintain a push over the broad 25-mile front and General Haig allowed the battle to become a series of local engagements, initially south of the Albert-Baupame Road, where his forces had their best success in the initial attack. Foch, who no longer had artillery superiority and who had his own disagreements with the British, was constantly pressured by Joffre to mount supportive attacks for their ally. 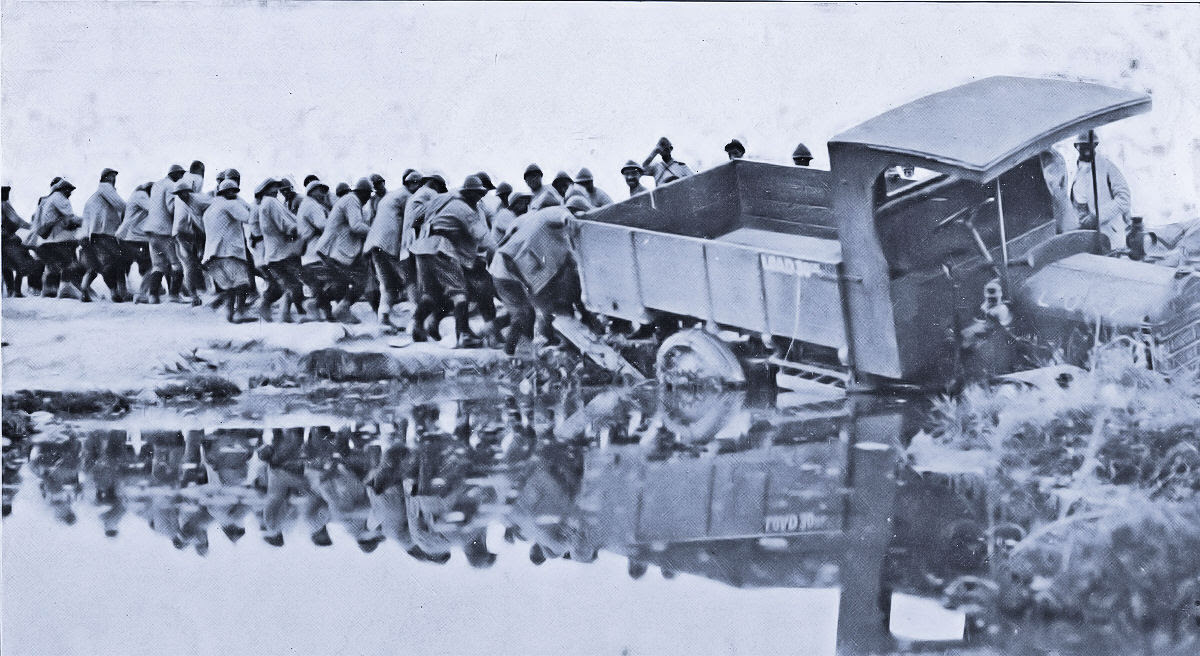 A major joint push—with Foch receiving substantial reinforcements— was made over much of September. The effort inflicted serious casualties on the German defenders and straightened out and extended the front a few miles further east. But a realization set in that the point of diminishing returns had long been passed. By the time the battle petered out in mid-November, the French Army had suffered 204,000 casualties at the Somme, roughly half of their losses at Verdun.