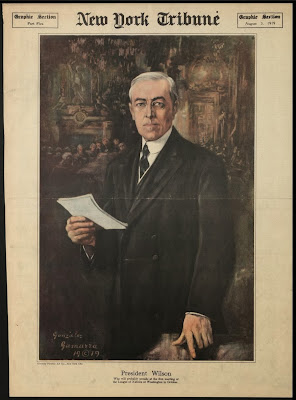 On this day in 1918, President Woodrow Wilson first enunciated his Fourteen Points speech to Congress. After several efforts to articulate America's war aims, he appointed a committee of experts known as The Inquiry to help him refine his ideas for peace. In December 1917 he asked The Inquiry to draw up specific recommendations for a comprehensive peace settlement.

Wilson presented a program of fourteen points to a joint session of Congress on 8 January 1918. Eight of the fourteen points treated specific territorial issues among the combatant nations. Five of the other six concerned general principles for a peaceful world: open covenants (i.e. treaties or agreements), openly arrived at; freedom of the seas; free trade; reduction of armaments; and adjustment of colonial claims based on the principles of self-determination. The fourteenth point proposed what was to become the League of Nations to guarantee the “political independence and territorial integrity [of] great and small states alike.” 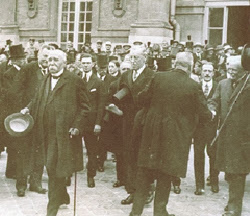 He opened his address:


It will be our wish and purpose that the processes of peace, when they are begun, shall be absolutely open and that they shall involve and permit henceforth no secret understandings of any kind. The day of conquest and aggrandizement is gone by; so is also the day of secret covenants entered into in the interest of particular governments and likely at some unlooked-for moment to upset the peace of the world. It is this happy fact, now clear to the view of every public man whose thoughts do not still linger in an age that is dead and gone, which makes it possible for every nation whose purposes are consistent with justice and the peace of the world to avow nor or at any other time the objects it has in view.

We entered this war because violations of right had occurred which touched us to the quick and made the life of our own people impossible unless they were corrected and the world secure once for all against their recurrence. What we demand in this war, therefore, is nothing peculiar to ourselves. It is that the world be made fit and safe to live in; and particularly that it be made safe for every peace-loving nation which, like our own, wishes to live its own life, determine its own institutions, be assured of justice and fair dealing by the other peoples of the world as against force and selfish aggression. All the peoples of the world are in effect partners in this interest, and for our own part we see very clearly that unless justice be done to others it will not be done to us. The program of the world's peace, therefore, is our program; and that program, the only possible program, as we see it, is this: