One of the most memorable literary traditions of the Great War involves the postwar pilgrimage of VAD nurse and author Vera Brittain to the grave of her brother Edward on the Asiago Plateau. Author Francis Mackay  describes the visit in the excellent new addition to the Battleground Europe series, Asiago. Edward was killed in what is known alternatively as the Battle of Asiago or Operation Radeztky, part of an even larger action on the Italian Front, the Battle of the Piave in June 1918. Mackay describes both the action in which Edward fell and then Vera's postwar visit to his grave: 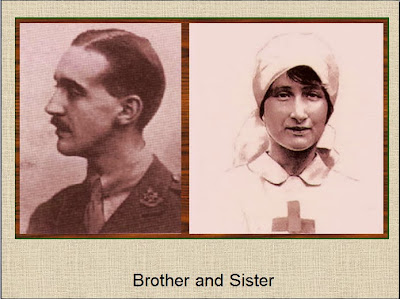 [The infantry assault began at 6:45 am on June 15th and several breeches were made in the British line.  Edward Brittain's] "A" Company had suffered severe casualties from artillery fire and was trying to hold nearly eight hundred metres of the line with (probably) only fifty rifles; an impossible task even when they were reinforced by the picquet platoon. Brittain, by now apparently the only unwounded officer in the company, appeared on the scene, returning from consulting with the French. Rapidly organizing a counter-attack group, which included some French soldiers, he led an attack which forced the enemy back. Some jumped out of the trench and ran back towards others coming through the wire. These enemy troops went to ground and opened fire on the Foresters, as did machine-gunners and riflemen on both sides of the wire. Brittain re-organized the defense of the trench, forming a flank with what troops were available. He apparently paused to observe the enemy, and was killed, possibly sniped by an Austrian officer. . . On the Allied right the Italian line [had been] breached, and the enemy penetrated about two kilometres towards the escarpment. They were held, but it took five days of bitter fighting to restore the line. In the centre the French beat off a mass attack with only minor casualties. The British were also attacked and the front line breached in several places, but after some hard fighting it was restored. Radetzky failed, and, after some bitter fighting, so did Albrecht. Conrad and Boroevic lost their last battles and the k.u.k. lost its will to win.


[Among the British dead was] Captain Edward Harold Brittain, MC, [who] was the adored elder brother of Vera Brittain. When war broke out the Brittain family had been living in Buxton and Edward sought a commission in the county regiment. He joined the 1 1/Sherwood Foresters in France, was wounded on the first day of the Somme, and awarded the MC. In 1914 Vera had been an undergraduate at Oxford but became a VAD Nurse after her fiancé, Roland Leighton, was mortally wounded with the 1/7 Worcesters at Hébuterne in December 1915. After the war she wrote Testament of Youth, married and was the mother of former Labour Cabinet Minister Baroness Shirley Williams.


After the Armistice . . .[many of the remains of A Company's casualties were re-interred] at Granezza Cemetery, near the southern end of the valley, and in the lea of Monte. Corno. This is a very quiet and peaceful place, and no less beautiful than the silent woods of the Barental Valley.


[Edward Brittain's] death was not more poignant than that of any other young officer or soldier but the eloquence of his sister's writing ensured that the anguish felt by his family and friends was recorded for future generations. She articulated for others not so gifted with words the agony of yet another death among those nearest and dearest to a family. After many years, Testament of Youth still has the capacity to move, as many of today's generation will testify. 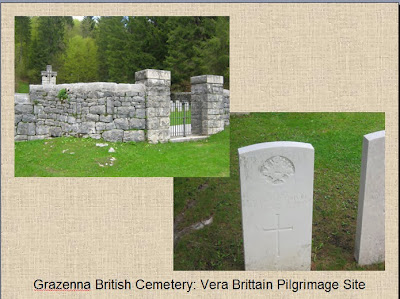 How strange, how strange it is," I reflected, as I looked, with an indefinable pain stabbing my chest, for Edward's name among those neat rows of oblong stones, "that all my past years-the childhood of which I have no one, now, to share the remembrance, the bright fields at Uppingham, the restless months in Buxton, the hopes and ambitions of Oxford, the losses and long-drawn agonies of the War- should be buried in this grave on the top of a mountain, in the lofty silence, the singing unearthly stillness, of these remote forests ! At every turn of every future road I shall want to ask him questions, to recall to him memories, and he will not be there. Who could have dreamed that the little boy born in such uneventful security to an ordinary provincial family would end his brief days in a battle among the high pine-woods of an unknown Italian plateau?"

Close to the wall, in the midst of a group of privates from the Sherwood Foresters who had all died on June 15th, I found his name "Captain E. H. Brittain, M.C., 11th Notts. and Derby Regt. Killed in action June 15th, 1918. Aged 22" In Venice I had bought some rosebuds and a small asparagus fern in a pot; the shopkeeper had told me that it would last a long time, and I planted it in the rough grass beside the grave.

"How trivial my life has been since the War ! "I thought, as I smoothed the earth over the fern. "How mean they are, these little strivings, these petty ambitions of us who are left, now that all of you are gone! How can the future achieve, through us, the somber majesty of the past? Oh, Edward, you're so lonely up here; why can't I stay for ever and keep your grave company, far from the world and its vain endeavors to rebuild civilization, on this Plateau where alone there is dignity and peace?"

But when at last I came from the cemetery, the child, who had been playing with his father near the car, ran up to me holding out a bunch of scabious and white clover that he had picked by the roadside.

"For the little signorina," he said.


By permission of Francis Mackay