The Centennial at the Grass Roots Series:
Let's Save the USS Olympia

USS Olympia (US Navy designations C-6/CA-15/CL-15/IX-40) is a protected cruiser that saw service from her commissioning in 1895 until 1922. While she served as both a training ship and an operational cruiser during and after WWI, she is best known as the flagship of Commodore George Dewey at Manila Bay in 1898 and as the ship that carried carried the remains of World War I's Unknown Soldier from France to Washington, DC. As a piece of history she has some incomparable distinctions: she is not only the last survivor of Manila Bay, she is also the last protected cruiser in the world, and the oldest steel-hulled American  warship still afloat.


The protected cruisers of the 19th century were generally smaller and somewhat lighter than the armored cruisers, for better range and speed, and were intended as commerce raiders and convoy vessels. They were "protected" by armored decks rather than by armored belts along the hull like the armored cruisers. Because of her timing, Olympia was built during a transitional period in American naval theory, where the emphasis shifted from commerce raiding to fleet action.

Olympia carries Harvey-process face hardened steel armor decks and turrets, and her original power plant was two vertical triple-expansion steam engines that drove her as fast as 21 knots in speed trials, with a cruising range of about 6,000 miles at a fairly sedate 15 knots. Her original 8-inch main battery were replaced during WWI by 6-inch guns.


Because of the strategic ambiguity of the protected cruisers in general during a period of  great naval expansion, Olympia was turned into a training ship and floating barracks in Charleston, SC, in 1902. In WWI she was patrolling the Atlantic coast and escorted convoys to France, the Mediterranean and Russia. During the the Allied intervention in the Russian Civil War she maneuvered with Royal Navy ships in the White Sea and later in the eastern Mediterranean.

Olympia was decommissioned for the last time in December 1922 and placed in reserve. Olympia has been a museum ship since she was ceded to the Independence Seaport Museum in Philadelphia in 1957 and was restored to her 1898 configuration. Olympia was designated a National Historic Landmark in 1966. 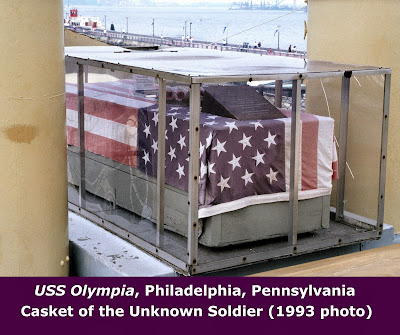 Since 2011, the Seaport Museum has invested in extensive repairs, but she is still in need of dry docking and substantial restoration. Olympia is in a more stable condition now than she has been for years. But water wins all bets against ship hulls, and the Seaport Museum, under the direction of the Navy (which technically still owns her), is looking for a new home for her. It will take an estimated $10,000,000 to preserve Olympia for the long term (one of which will dry-dock her permanently) that the Seaport Museum simply cannot raise. Two different stewards, one in South Carolina and one in California, are vying for her berthing. Wherever she ends up she needs as much help as she can get.