Last Friday in our Western Front article about Fort de Loncin, we mentioned that the commander of the Liège Forts, Lieutenant-General Count Gérard Georges Mathieu Joseph Leman, had survived the titanic blast at the fort and had spent the remainder of the war as a prisoner. Contributing Editor Tony Langley has pointed out to me that I was not quite accurate in that last detail.

The general was released from German captivity during the war itself due to ill health. He was turned over by the German authorities without conditions of parole or any other restrictions in December 1917. He returned to Belgian and Allied controlled territory, and while treated as a returning hero, he did not take on any military command afterwards, naturally due to his failing health. 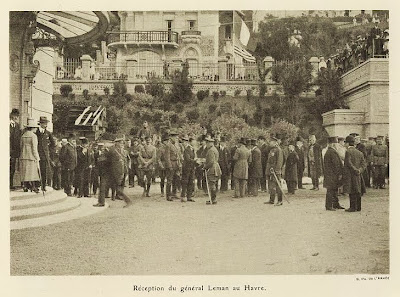 The above photo shows the general's reception at Le Havre, France, then the seat of the Belgian government in exile.  It wasn't until after the Armistice that he was able to return to Liège, which was his home town.

His death in 1920 was an occasion of state for Belgium, marking the passing of a national hero. Leman was a fascinating figure even before his 1914 heroics — a brilliant mathematician, royalist, and trusted military tutor to King Albert.  An excellent biographical sketch on him can be found at: