Second Act: The Potemkin in the First World War

Everyone has heard of the famous mutiny in 1905 aboard the Russian battleship Potemkin (or, more properly, Kniaz Potemkin Tavricheskii). Less well known is the fact that, after the ship returned to the Russian Navy, she was renamed Panteleimon (after an early Christian saint) and served throughout the First World War in the Black Sea Fleet. 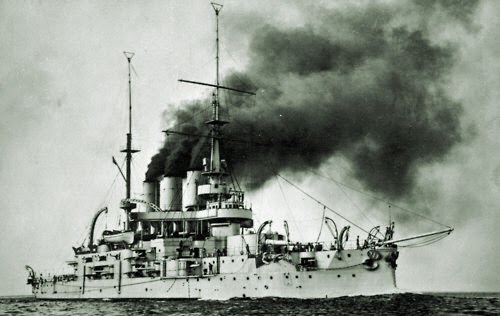 During the war she earned the unusual distinction of being one of the few pre-dreadnought battleships ever to score a hit on a dreadnought in battle. On 10 May 1915, while the Russian fleet was bombarding the Turkish fortifications at the Bosphorus, the Panteleimon hit the German-built battlecruiser Goeben with two 12-inch shells. This was enough to convince the battlecruiser to break off the action.

Thanks to author Steve McLaughlin for these details.