I want to thank our regular readers for the suggestions we have received on our Virtual Tour.  In the future we will be having fewer slides, but with more information on the featured site. Today we are moving into the Somme sector, where we will be stopping at various sites from both 1916 and 1918. 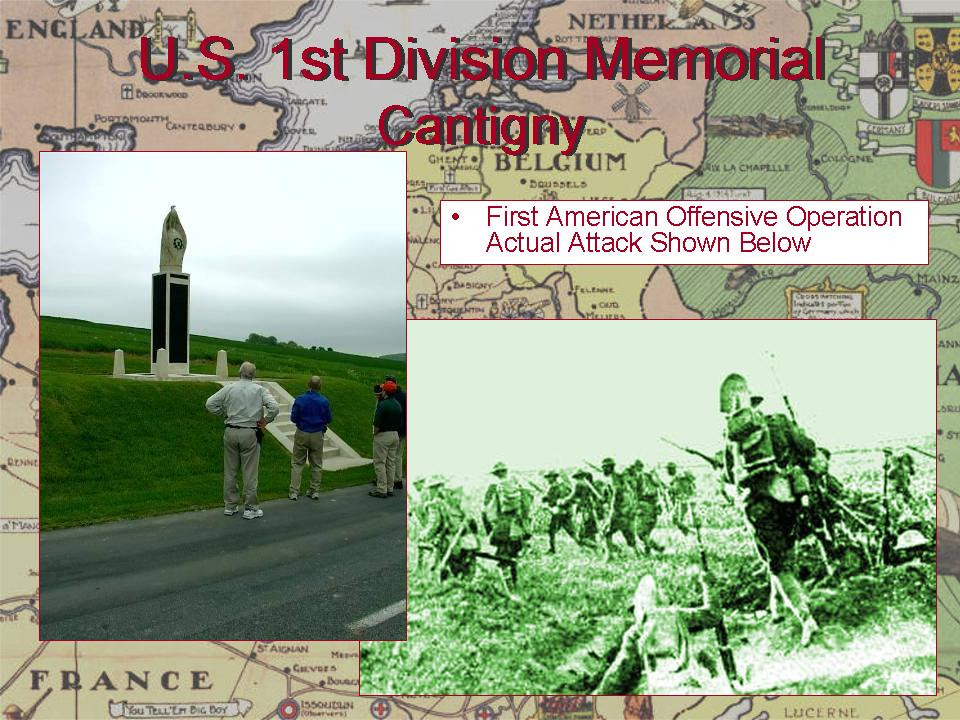 Where:    The Somme Sector, North of Paris

Memorable For:      First US Offensive and Victory.

How It Looked To A Doughboy

Into the village of Cantigny we go. There remained nothing but ruins. We passed on through to the other side of the village. Here we encountered barbed wire entanglements but it was our good fortune to get through these without any mishap. But once across I notice that the boys are falling down fast. A shell burst about ten yards in front of me and the dirt from the explosion knocked me flat on my back. I got up again but could not see further than one hundred feet.

I heard someone yell "lay down." I knelt on one knee and wondered what would come next...We laid down and started to shoot and it was our good fortune that the second wave reached the place at this time. About twenty Dutchmen came out of the holes, threw down their rifles and stood with their hands up. The doughboys didn't pay any attention to this but started in to butcher and shoot them. One of the doughboys on the run stabbed a Dutchman and his bayonet went clear through him...

The German artillery was in action all the time...I stopped at a strong point and asked the boy in the trench if there was room for me to get in. "Don't ask for room, but get in before you get your [!#%&] shot off," a doughboy said...

We stayed there all that night and the next day, being relieved at two o'clock the following morning, taking position in the first line of reserve trenches. We ate a cooked dinner at eleven o'clock, that being the first meal we've had in three days.