In September 1917 the French Magazine La Baïonnette dedicated a special issue to welcome the United States into the war. Here are some pages from that editon. 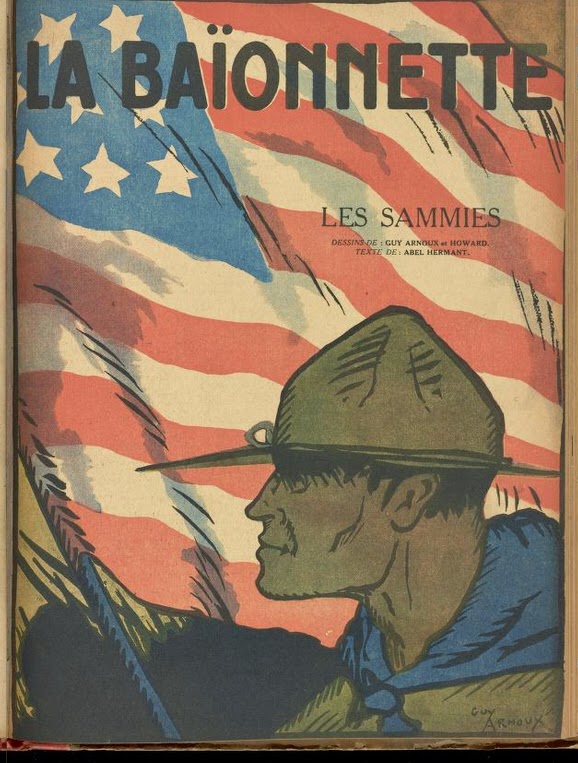 La Baïonnette (The Bayonet) was first published in 1915, when a group of French illustrators got together and decided to create a satirical/humor magazine on the war. By the end of 1914 and the beginning of 1915, numerous soldiers who had previously been working in the printing industry, were released from military duty and sent back to their former places of work, to meet the increased demand for news publications. Many new magazine titles were also created at that time, La Baïonnette amongst them.

The magazine was known by several names: initially as a Coups de Baionnette and a la Baionnette', but later it was simplified to La Baïonnette. It was a fiercely patriotic publication in general, but mainly seen from the point of view of the common foot-soldier, housewife, or French worker. In spite of the impressive number of artists who worked for La Baïonnette it was never elitist or meant for high society. The main artists working for the magazine were from the so-called Montmartre group with Willette, Poulbot, Steinlen, and Abel Faivre, filled out with other renowned illustrators in the Parisian publishing world like Fabiano and Herouard. Dozens of others would also contribute over the years until publication ceased at the end of the war in early 1919.

Each issue was built up around a theme — leave, food, women replacing men behind the front, godmothers, new recruits, wounded, animals at war, Paris during wartime, and so on. There was no advertising in the magazine. It was partially published in color with many full-page illustrations. The inside pages consisted of more cartoons, satirical drawings, jokes, and witty commentary. Because of its colorful appearance, due mainly to the talent of the top-notch artists contributing, La Baïonnette was often saved over the years as keepsakes from the war years. It was also sold in bound editions and these were even more likely to be saved in households or libraries.

Because of its attractive and colorful appearance, La Baïonnette is still avidly collected and fetches relatively higher prices on the secondhand market than other contemporary publications. Extracts from the magazine are still regularly used in modern illustrated books on the Great War, with modern French publications almost invariably containing color illustrations or covers from this outstanding magazine.