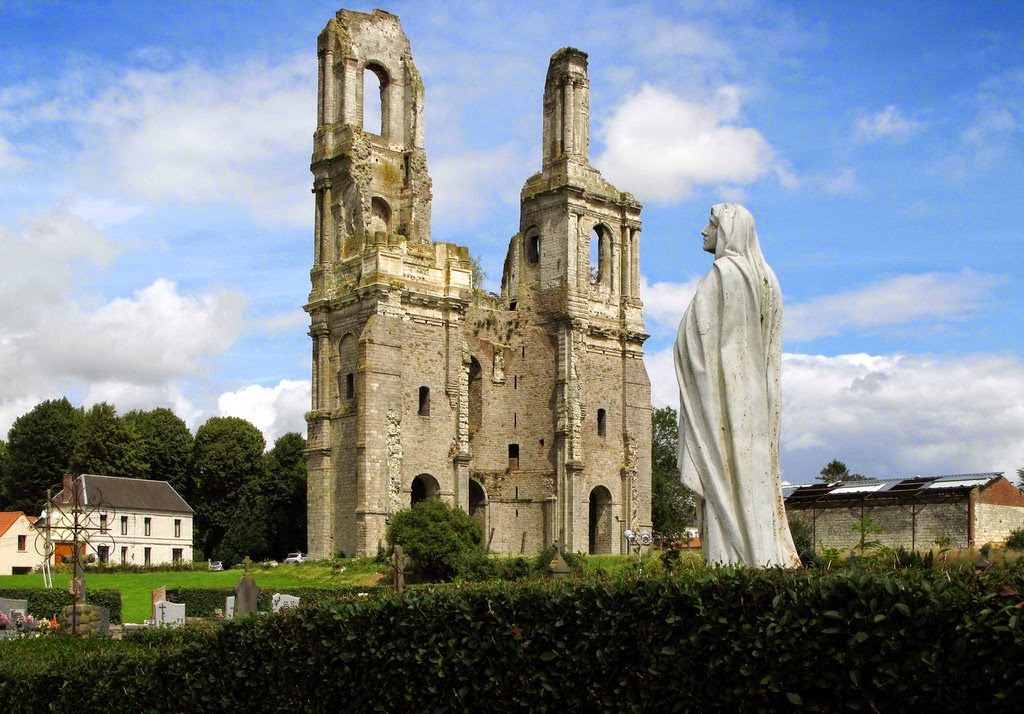 On a hill midway between Notre Dame de Lorette and the City of Arras stand the remains of two towers which bear testament not only to the once-powerful Mont-Saint-Eloi Abbey but also to the savage fighting that took place in the area during the Great War. Similar ruins are used evocatively in repetitive sequences in the film, Oh, What a Lovely War!

According to legend the abbey was established in the 7th-century by Saint Vindicianus, a disciple of Saint Eligius (Saint Eloi in French), and by the Middle Ages it had become a powerful religious centre; however, the turbulent times of the Revolution saw its walls pillaged for their stone. All that survived were the twin towers of white limestone and the porch on the west wall.

From the beginning of the Great War the towers were used by French troops to observe German positions on Lorette Spur and Vimy Ridge. The suspicions of the French soldiers were aroused when Germans fired upon their every movement until it was realized that what was giving them away was not a spy but the birds nesting on the towers which took flight when troops disturbed them.

Heavy shelling during the war truncated the towers, reducing their height from 53 to 44 metres. In 1921 they were finally listed on France's register of ancient monuments. Purchased by Pas-de-Calais Council in 2004, the towers have since undergone much-needed works to consolidate their structure. They are a powerful symbol, a living monument that illustrates the horrors of war while calling for peace.

In early 1916 the British Army relieved French troops in the sector. The latter had established an extension to the local cemetery in Ecoivres, at the foot of the hill about a mile from the abbey ruins, to bury 786 of their soldiers who died there, mostly in the fighting of 1915. British and Commonwealth burials were added progressively to the cemetery as fighting ensued in the area.  There are approximately 2,500 burials at the cemetery today, including four German graves.

From: The Remembrancetrails-northernfrance  and Commonwealth War Graves Websites